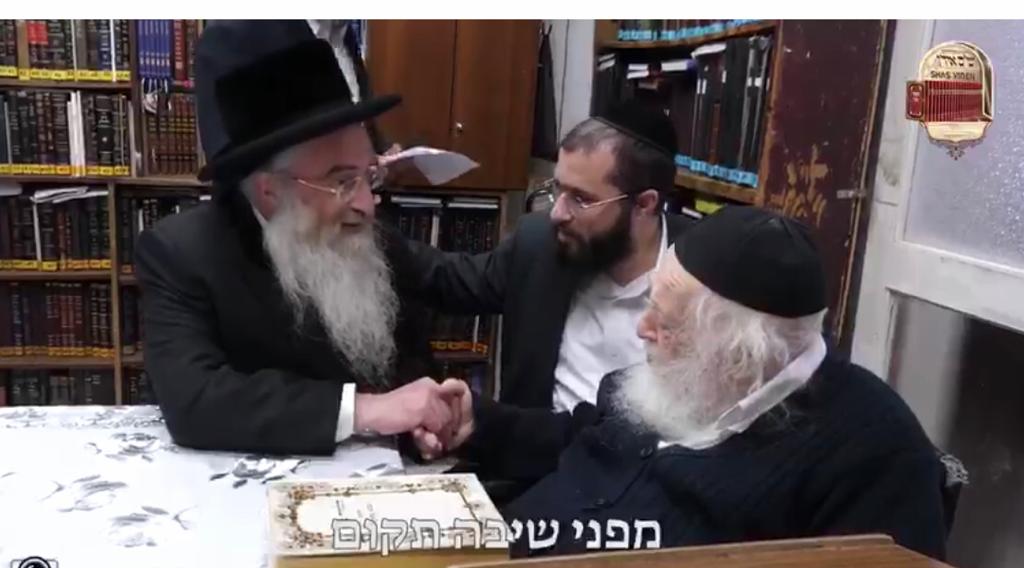 Tens of thousands often gather at the small house in Rashbam Street, Bnei Brak. These include hundreds of Rabbis and leaders of the Jewish people, day after day.   Therefore, it was most surprising when Maran, Sar Hatorah, despite being many years his senior, rose from his seat to honor one of these visitors, and accompanied his actions with the recitation of the verse: “Mipnei seiva sokum – Before the elderly one should rise!”

The visitor was Hagaon Harav Avrohom Eisen, shlit”a, the Pozna Rov, and founder of the Shas Yiden Network of Kollelim, was taken by Rav Chaim’s action and words. Rav Eisen had had come to Rav Chaim to formally invite him to the 10th Anniversary celebration of the founding of Shas Yiden, of which Maran Sar Hatorah is the Nasi. The celebration which took place a week later at an impressive gathering presided over by Rav Chaim and attended by the gedolei Torah of Eretz Yisroel at the Keter Rimon Hall, is the subject of a separate article.

In response to the expression of amazement by Rav Avrohom about the rising of Rav Chaim before him, Maran Sar Hatorah explained: “In light of his great efforts to increase Torah in the Jewish people and to groom many tens of avreichim to know the entire Shas – Gemora, Rashi and Tosfos, one should rise before the Pozna Rov!”

Come and acknowledge our colleague the Pozna Rov, Hagaon Rav Avrohom Halevi Eisen, shlit”a, on the occasion of the tenth anniversary of the founding of the Shas Yiden kollelim. A few years ago, he responded to my request and established other kollelim where tens of avreichim, great talmidei chachomim who are indeed like they are called that they know Shas Bavli fully. I have examined them on a number of occasions, and they answered my questions immediately on the spot.

In addition, my son, Reb Shaul, shlit”a, examined them for a full hour, ranging across the entire Shas. He was amazed at their all-encompassing knowledge and referred to them as described in the Talmud (Kiddushin 30a) “If a person asks you a matter, don’t fumble and then reply; rather reply immediately etc.”

Thus, it is a very great zchus to strengthen and support great talmidei chachomim like them with an open hand. All those who do support them should be blessed with all the brochos that are said about those who support Torah — Chaim Kanievsky