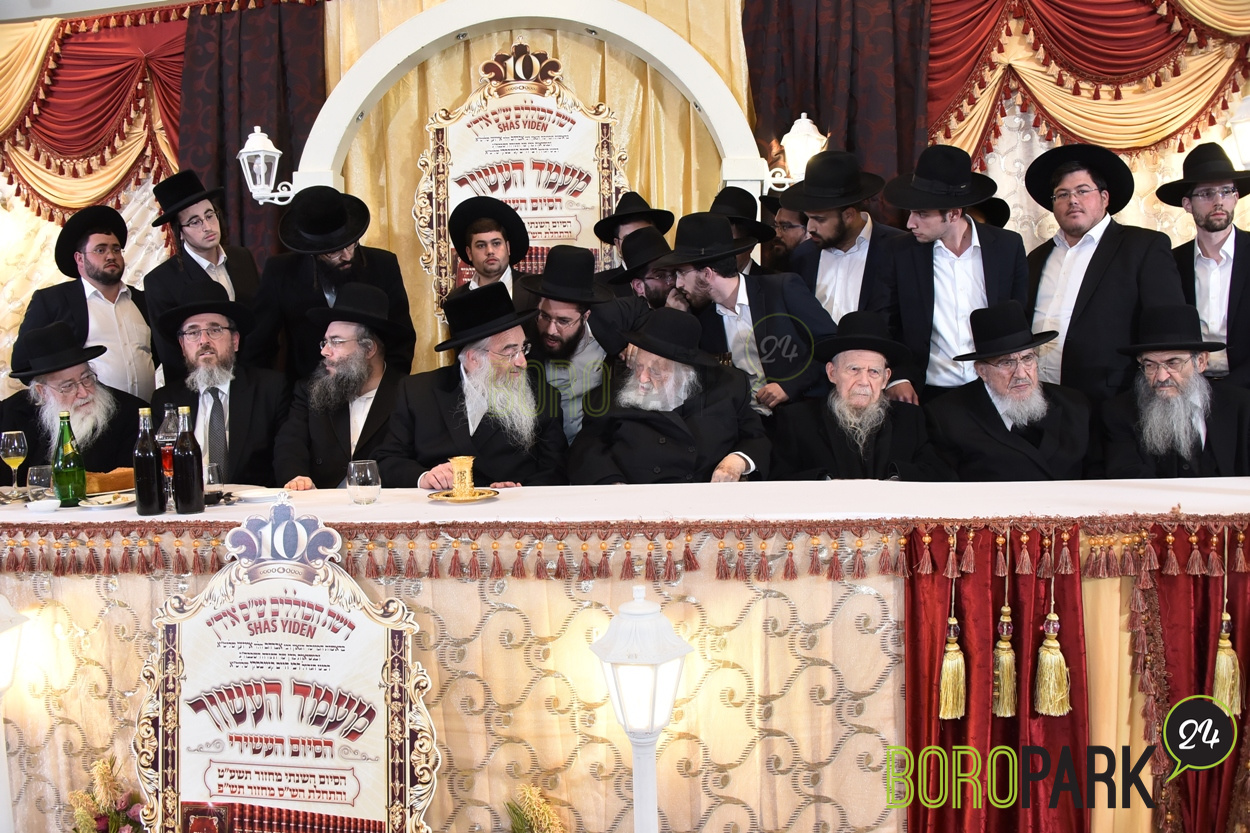 “The zechus of Torah that the learned yungeleit of Shas Yidden serves as a protection for Klal Yisroel and the entire world from all evil.”

“The true derech halimud is followed by the rabbanim and gaonim of Shas Yidden.”

“To sit with 62 yungeleit, gaonim who have completed the entire Shas, can you imagine the simcha this creates in shamayim?”

“The gaonim of Shas Yidden are making a public Kiddush Hashem, by being knowledgeable in the entire Shas, something that is unprecedented.”

“The gaonim of Shas Yidden are familiar with the entire Shas through and through, in depth as I have seen for myself.”

In a shocking gesture, R’ Chaim Kanievsky Shlit’a struggled to stand up in honor of the founder of the kollelim R’ Avrohom Eisen Shlit’a Pozna Rav, on behalf of his efforts to spread Torah and establish tens of Torah giants, Shas Yidden, who are learned in all of Shas.

A momentous event in honor of the Torah learning took place on Tuesday Night in the Keter HaRimon hall in Bnei Brak as befits the Torah and those who toil in her depths.  At the event, in the presence of Gedolei Yisroel, all 62 loimdim, shas yidden, concluded Shas as is the yearly custom.  The joy and kavod haTorah was tremendous!

The Shas Yidden Kollel Network, which planted its seeds in Beit Shemesh ten years ago, has since grown and flourished.  The Beit Shemesh Kollel currently consists of 21 avreichim, The Yerushalayim Kollel consists of 14 yungeleit, in Bnei Brak the total is 16 and in Beitar Ilit has 11.  That is a sum total of 62 gaoinim steeped in the learnings of Shas who are completing its entirety with Rashi and Tosfos on a yearly basis.

The specialized structure of learning in the Kollelim network is reviewed with a chazarah of more than 50 blatt every week and tallies to 225 blatt every single month.  That is how the gaonim yungeleit are zoche to complete Shas thoroughly every year.

The name “Shas Yidden” has gained traction far and wide and the yungeleit cherish a special relationship with HaGoan R’ Chaim Kanievsky Shlit’a the leader of all Kollelim.  On countless occasions the Gaon farhered the yungeleit on the entire Shas and was amazed at the depth of their answers.

The Siyum event was conducted after a festive meal was served in the presence of a vast array of Gedolei Torah and Chassidus who participated in the grand event and expressed their deep joy at the accomplishment of the 62 yungeleit that completed Shas in depth.

This year, the kollelim network’s tenth anniversary was celebrated, which translates into completing Shas a total of ten times.

Rav Meilich Biderman Shlit’a, who farhered the misaymei haShas prior to the siyum, expressed his deep emotions toward the yungeleit and the knowledge they possess on each blat.  He added that this phenomenon has never existed since the writing of Talmid Bavli.

The Viznitzer Rebbe Shlit’a of Beit Shemesh spoke of the chashivus of the misaymei haShas and gave his holy blessing to the founder of the kollelim, Rav Eisen Shlit’a, for enabling this concept, for setting up an army of Talmidim that are familiar with the entire Shas from cover to cover.  He added that his son in law is zoche to learn in the kollel and whenever he’s in need of a maareh makom he gets an accurate answer immediately.

The Rosh Yeshiva of Ponevezh Hagaon R’ Baroch Dov Pavorsky Shlit’a started his lecture quoting the words of “Nefesh Chaim” who explains the love Hashem has for every word of Torah.  Every word of Torah that leaves the mouth of a yid travels to shamayim and gets embraced lovingly by Hashem building endless spheres of kedusha.  The kedusha brings brachos and hashpaos to the one that uttered even one single word of Torah.

“In our presence are 62 yungeleit, gaonim, who have completed the entire Shas.  Imagine the joy created in shamayim thanks to the Shas Yidden” said the Rosh Yeshiva.  “How much kedusha they are filling the world with and how much shefa and abundance they are bringing upon the world with their koach haTorah.”

The hundreds of attendees, who took part in the Simcha Shel Torah, gave a standing ovation in awed respect as R’ Chaim Kanievsky Shlit’a, and Rav Edelstein Shlit’a made their honored appearance to display their respect and support for the avreichim of Shas Yidden and its founder.

Rav Edelstein commented that the derech halimud of Shas Yidden is the true way of learning.  As Chazal say:  first one should learn and only then go into depth.  The Rosh Yeshiva expressed his pain at those who don’t understand that learning Gemara with Rashi is very chashuv even without Tosfos and here we have Shas Yidden who managed to complete Shas with Tosfos.

“These are the real Talmidei Chachamim” said the Rosh Yeshiva.  “This is the right way to learn Torah. Boruch Hashem that our generation has been zoche to true learning.  There’s a tzibbur of 62 yungeleit, gaonim that completed the entire Shas.  Hashem should help that they should have an effect on others who will follow in their footsteps.  That, in turn, will have an effect on those that have not yet reached the goal. The merit of the misaymei haShas is tremendous as is the merit of their families and all those that aid in the running of the kollel.”

After the inspirational words of the Rosh Yeshiva, in the presence of of Gedoilei Torah, the Rosh Hakollelim  R’ Moshe Isaac Samet Shlit’a got up and was misayam Shas.  There was not a dry eye to be found amongst the crowd as R’ Samet’s voice, accompanied by 62 yungeleit, rang out with an emotional intensity.

After joyous music and dancing in honor of this momentous completion, Rav Kanievsky Shlit’a drank L’chaim in honor of the Torah and blessed the founder, Hagaon R’ Avrohom Eisen Shlit”a, that he should continue with his holy work together with those that are aiding in his accomplishments.  After the completion, Rav Eisen Shlit’a started the new Machzor Hashas with the first Mishnah of Brachos with the accompanying Rashi.

The respect that he has toward the founder of the kollelim was evident when he visited the holy home of R’ Chaim on Monday before the event. Rav Chaim made a tremendous effort to stand in his presence.  He added that one should get up for Rav Eisen, for his accomplishments in the spreading of Torah which resulted in tens of yungeleit that are knowledgeable in all of Shas.

Rav Chaim Feinstein Shlit’a, the Rosh Yeshiva of Ateres Shloime, who farhered the yungeleit for hours on end shared testimony that the yungeleit are fully knowledgeable in Shas, that he alone was privy to the knowledge during the farhers.

“The Nefesh HaChaim says that the Ohr Hagunez that Hashem has saved for the time of Moshiach is hidden in the words of the Torah and those who toil in Torah are zoche to the light.  That is the goal of this world, to toil in the depths of the Torah, to know and understand and delve in its depth and to review.”

Rav Feinstein Shlit’a added a bracha for the supporters that donate of their resources to upkeep the Kollelim Network of Shas Yidden that they shoud be zoche to the crown of Torah.

At the closing of the event, special envelopes with substantial remuneration were handed to the holy wives, the partners of the misaymei haShas.  It is only with the constant support and encouragement that they provide to their spouses that they can learn with undisturbed diligence day in day out even during the most hectic times.

The celebration was concluded by the beautiful singing of the renowned singer R’ Aarale Samet with the Yachad Capella who sang to honor the Lomdei Troah.  The night ended to the tune of the heartfelt songs celebrating the joy of Torah complemented by the dancing of mesaymei haShas and their families who were present to celebrate the big day.

For more information on Shas Yiden, to view live farhers, or to donate, click on www.shasyiden.com 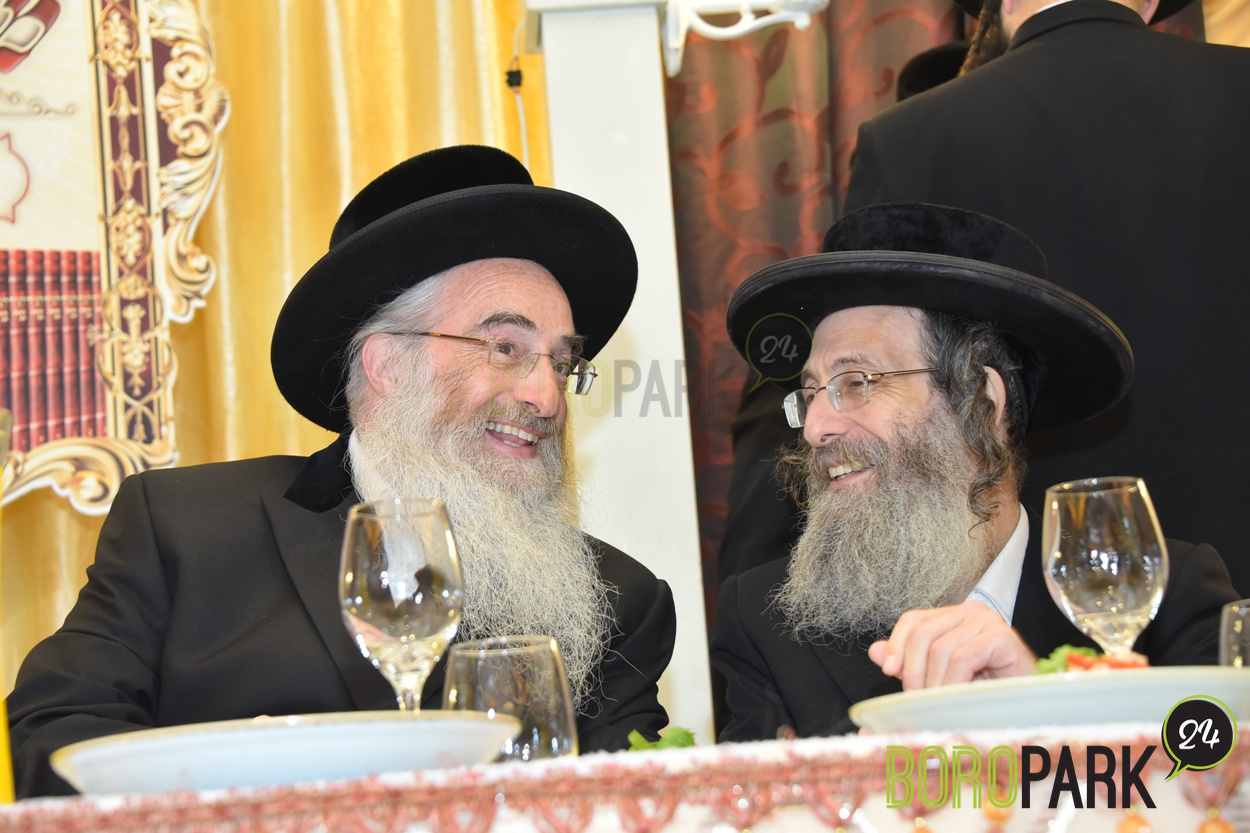 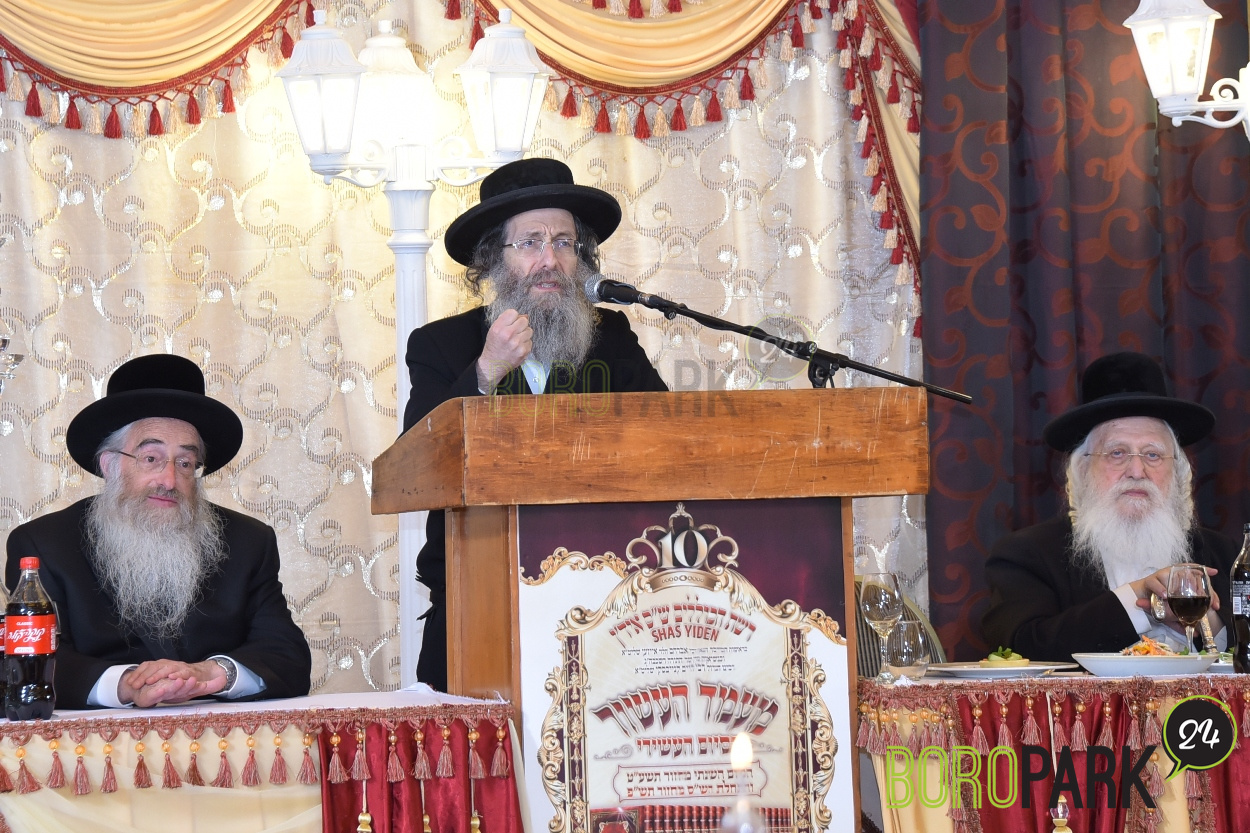 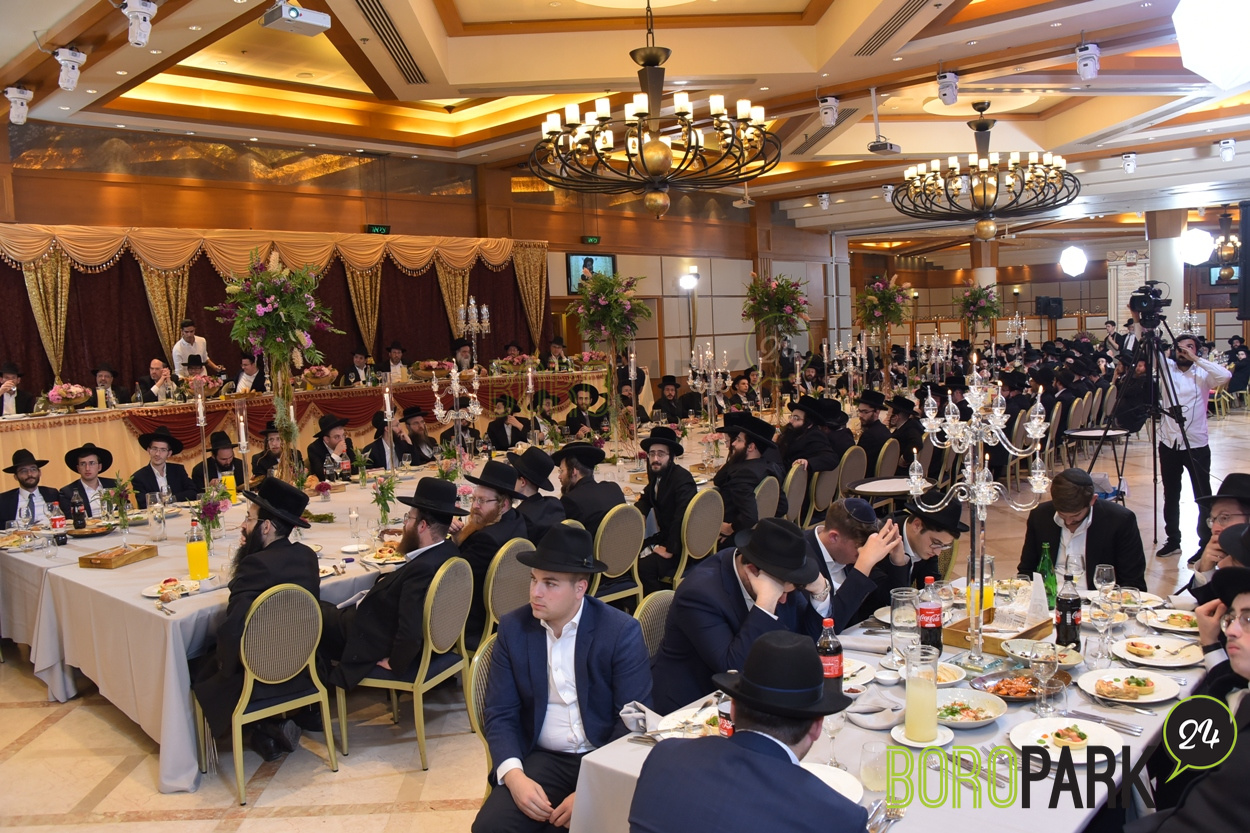 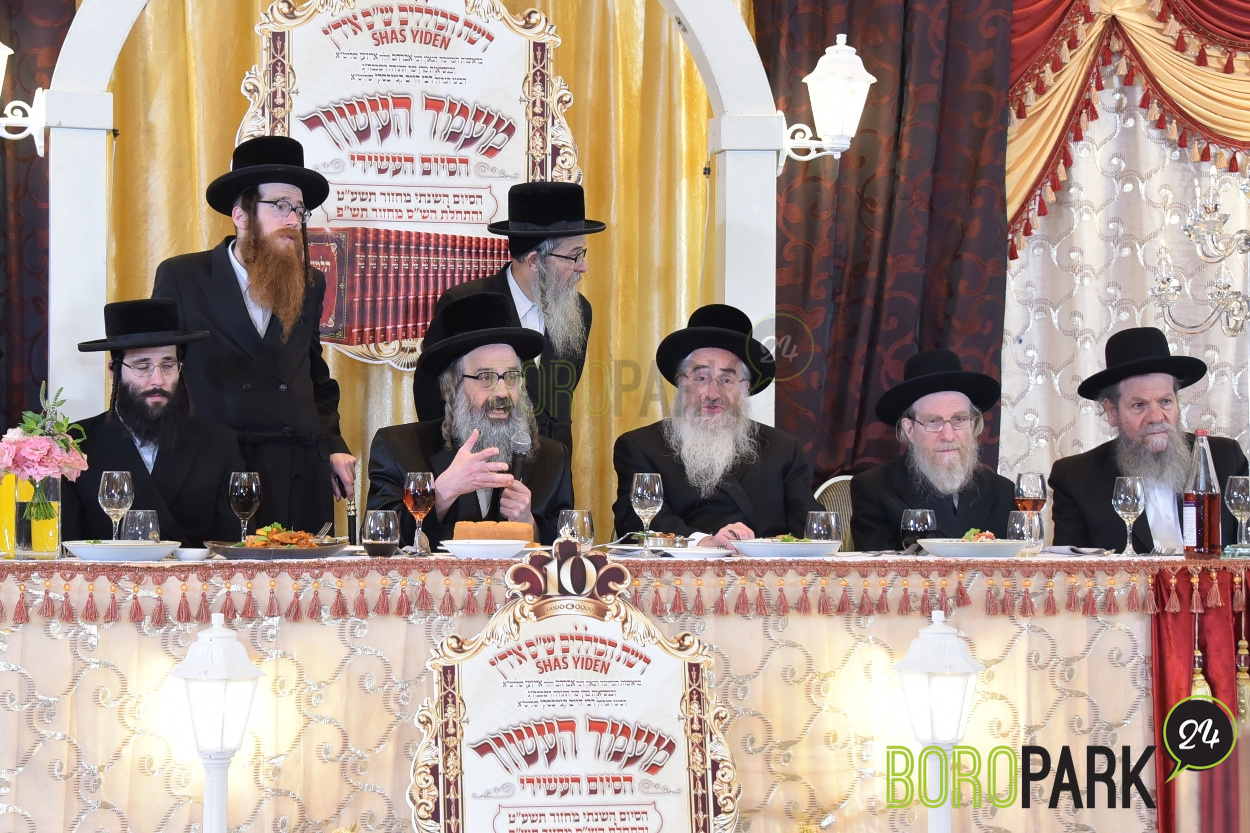 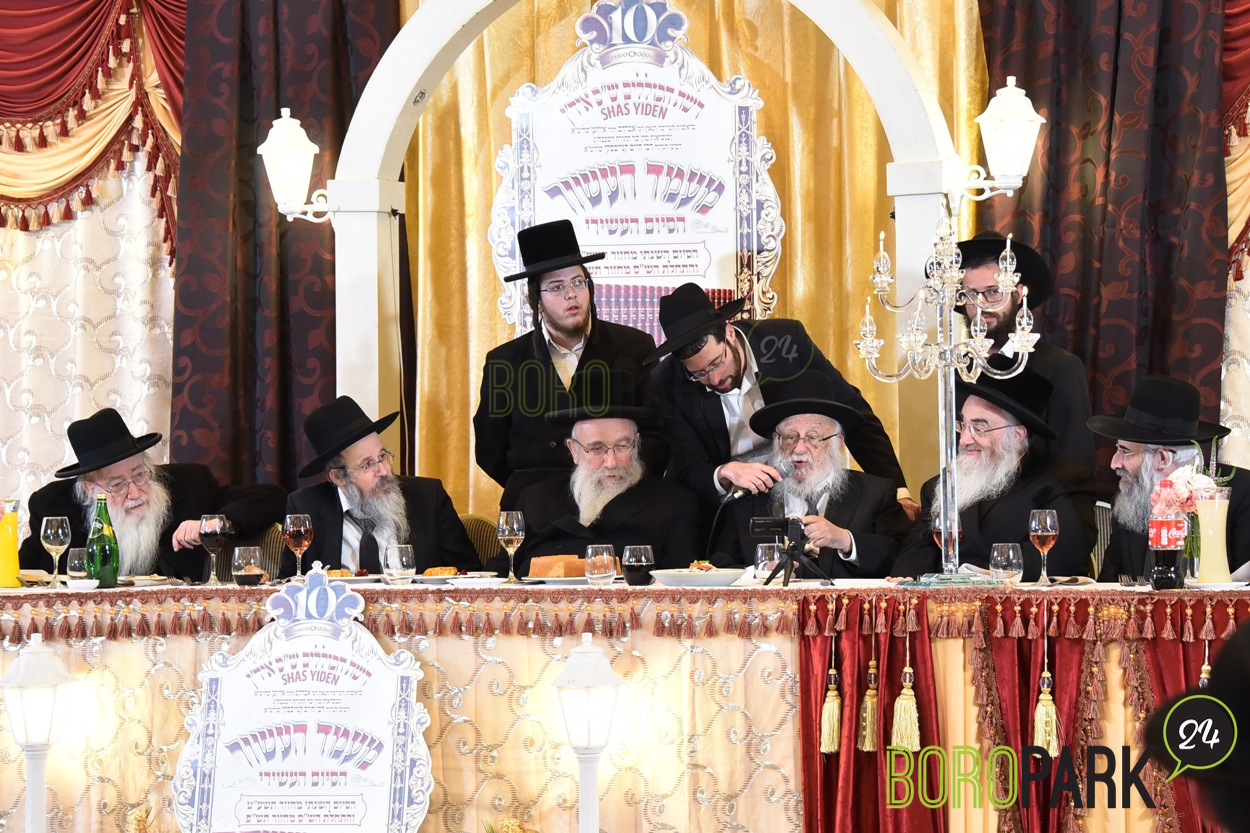 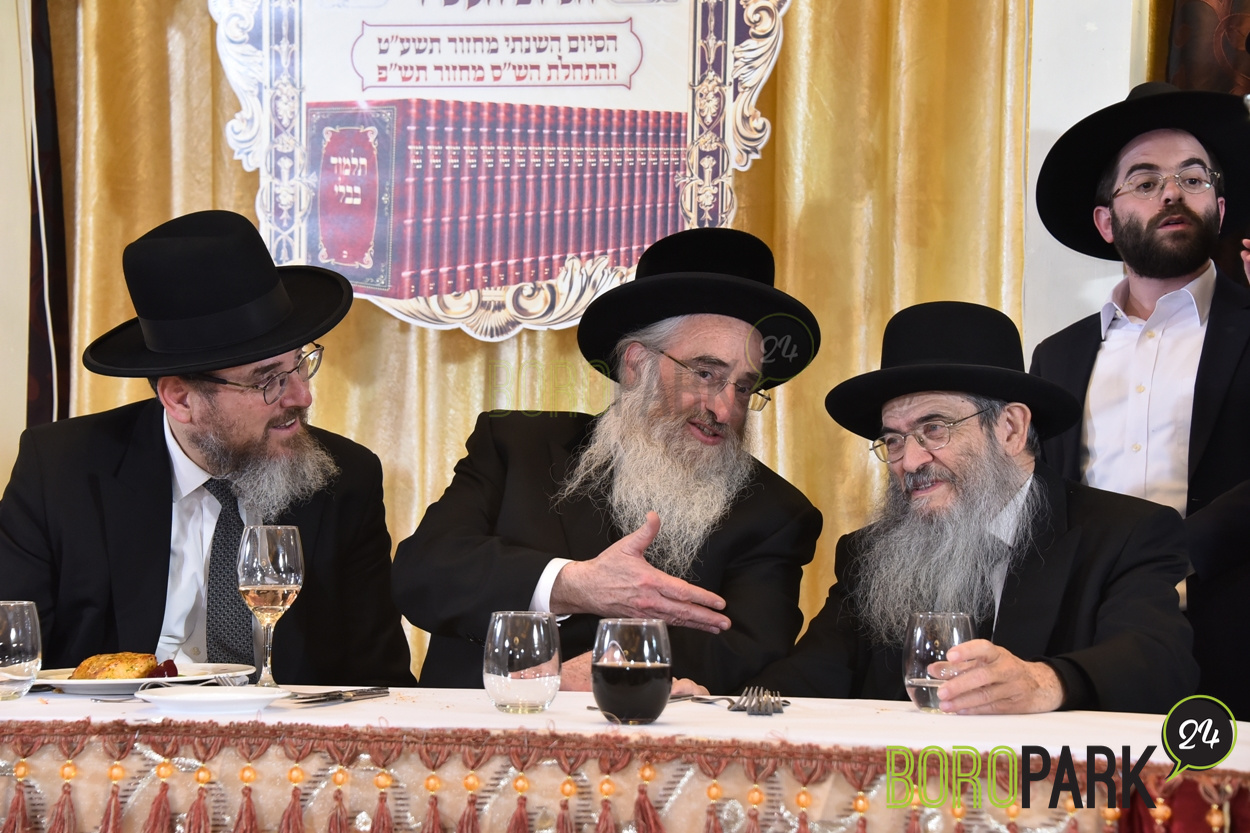 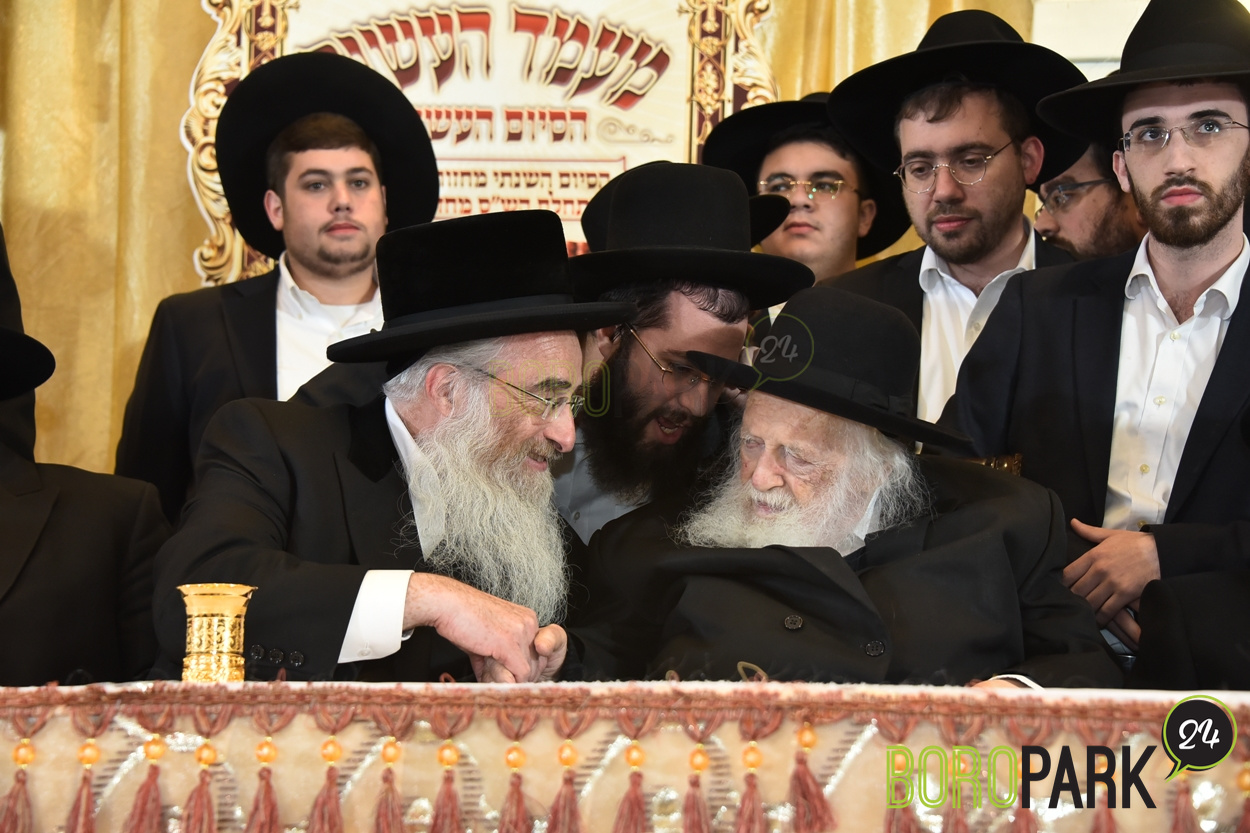 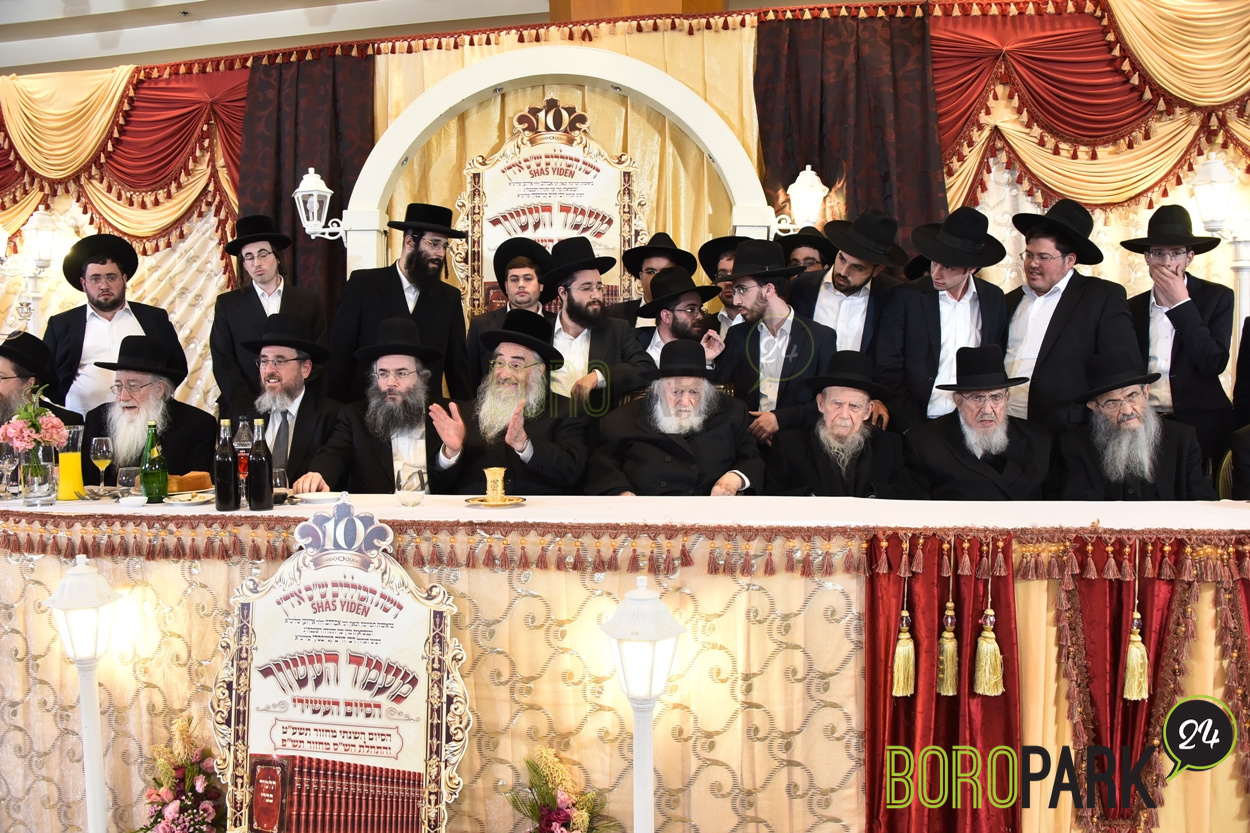 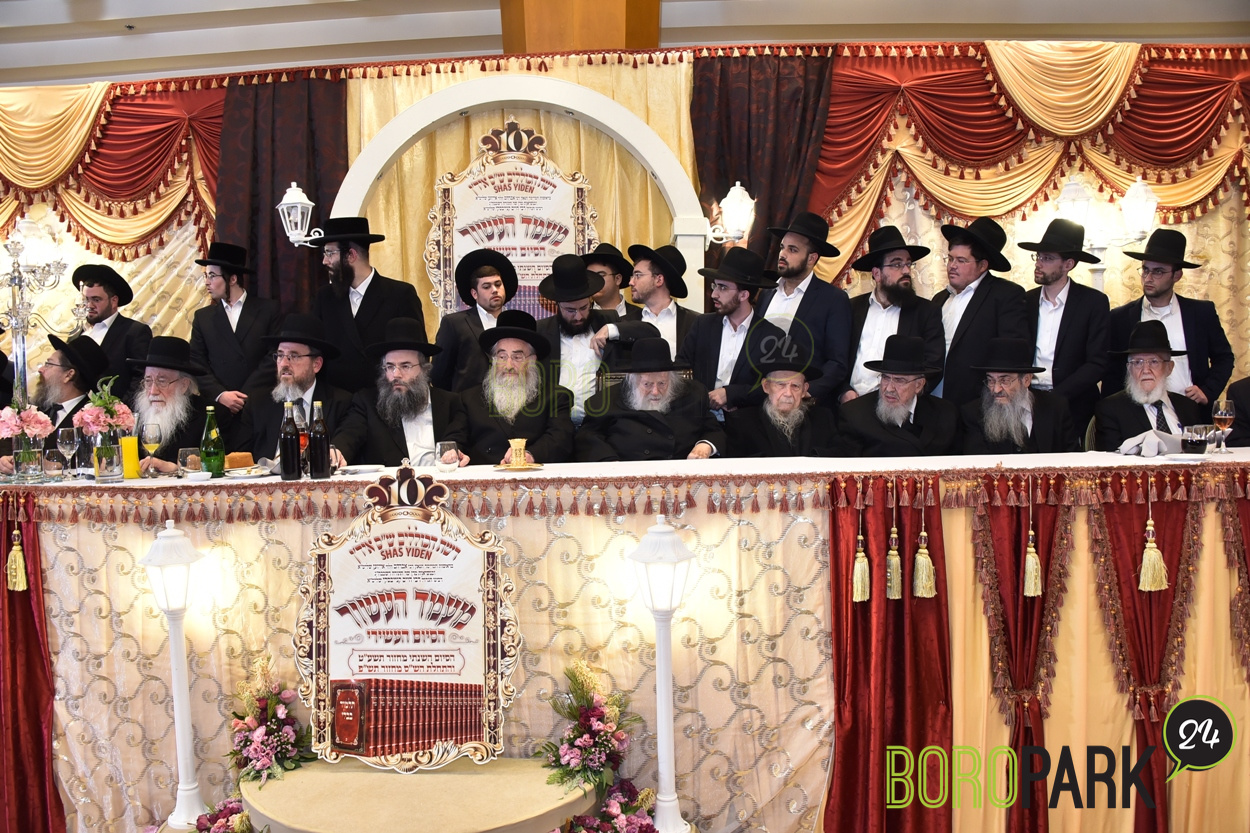 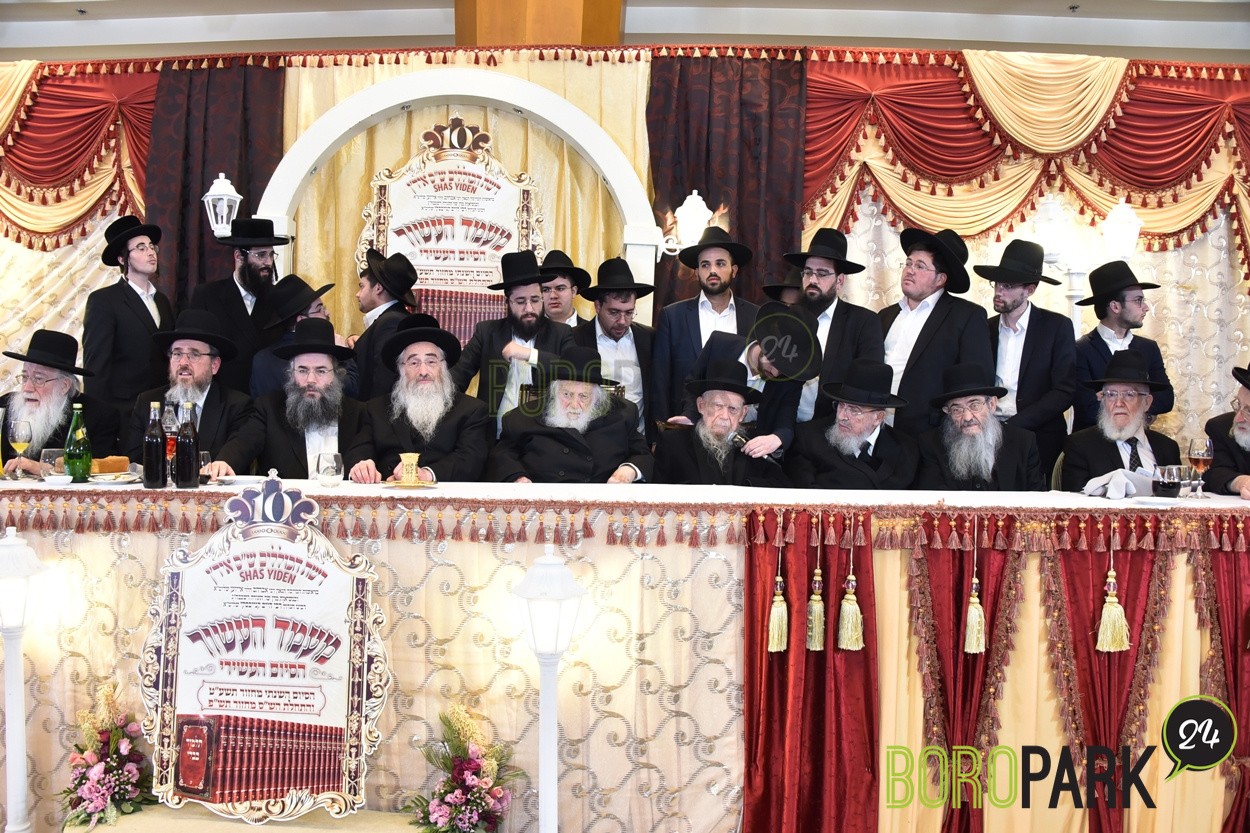 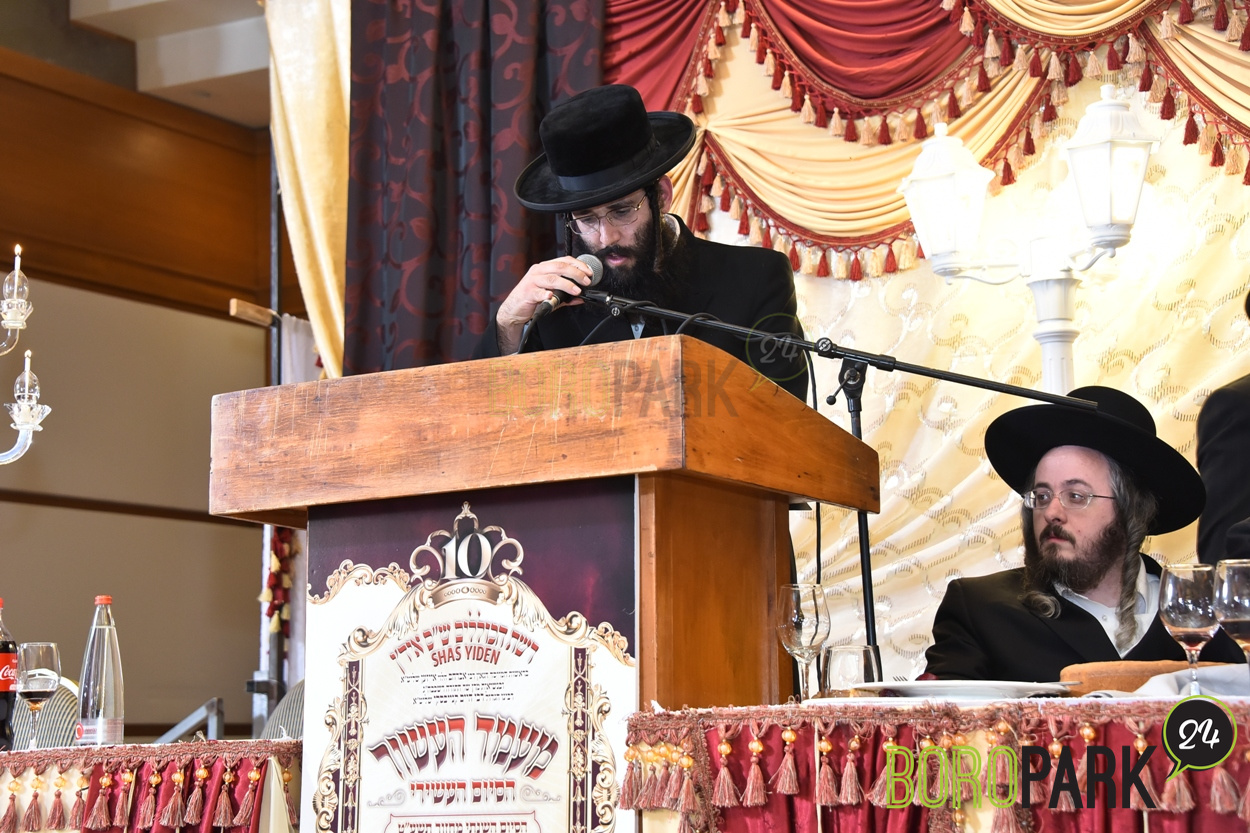 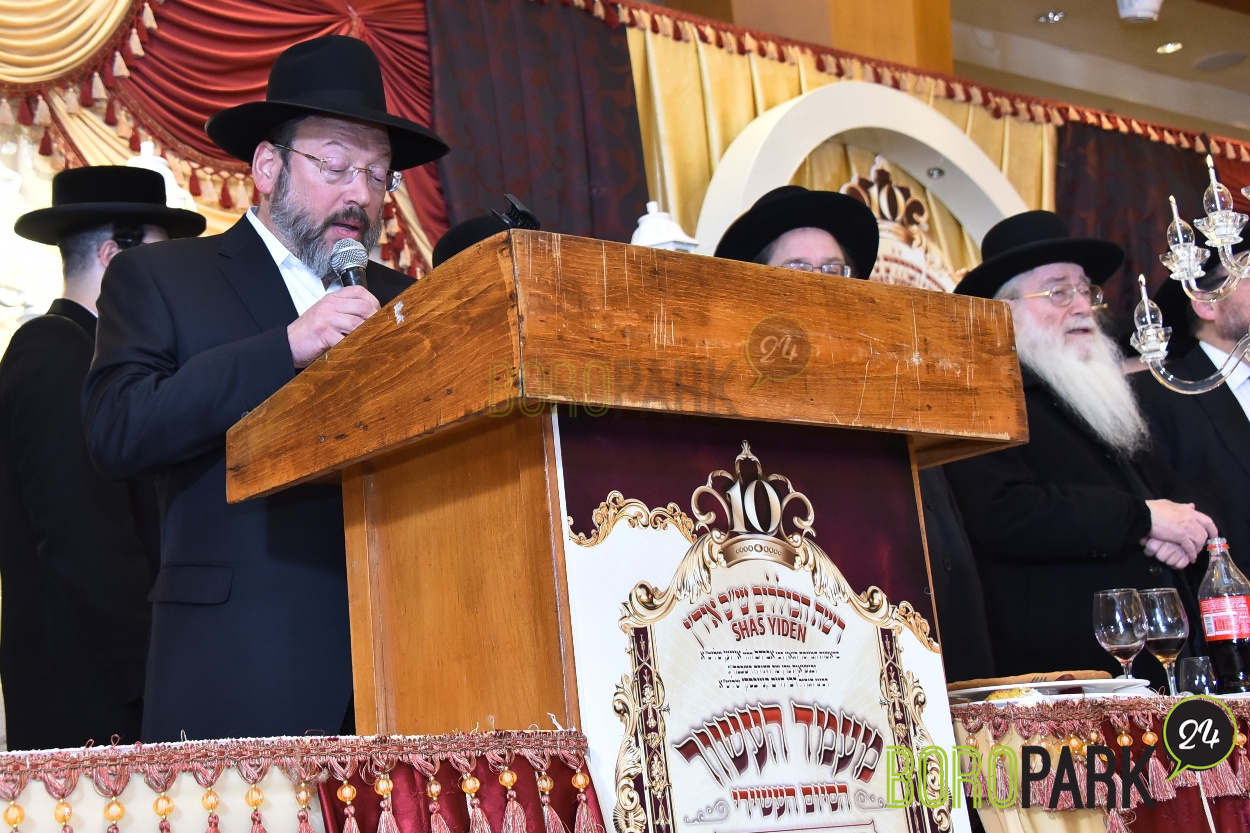 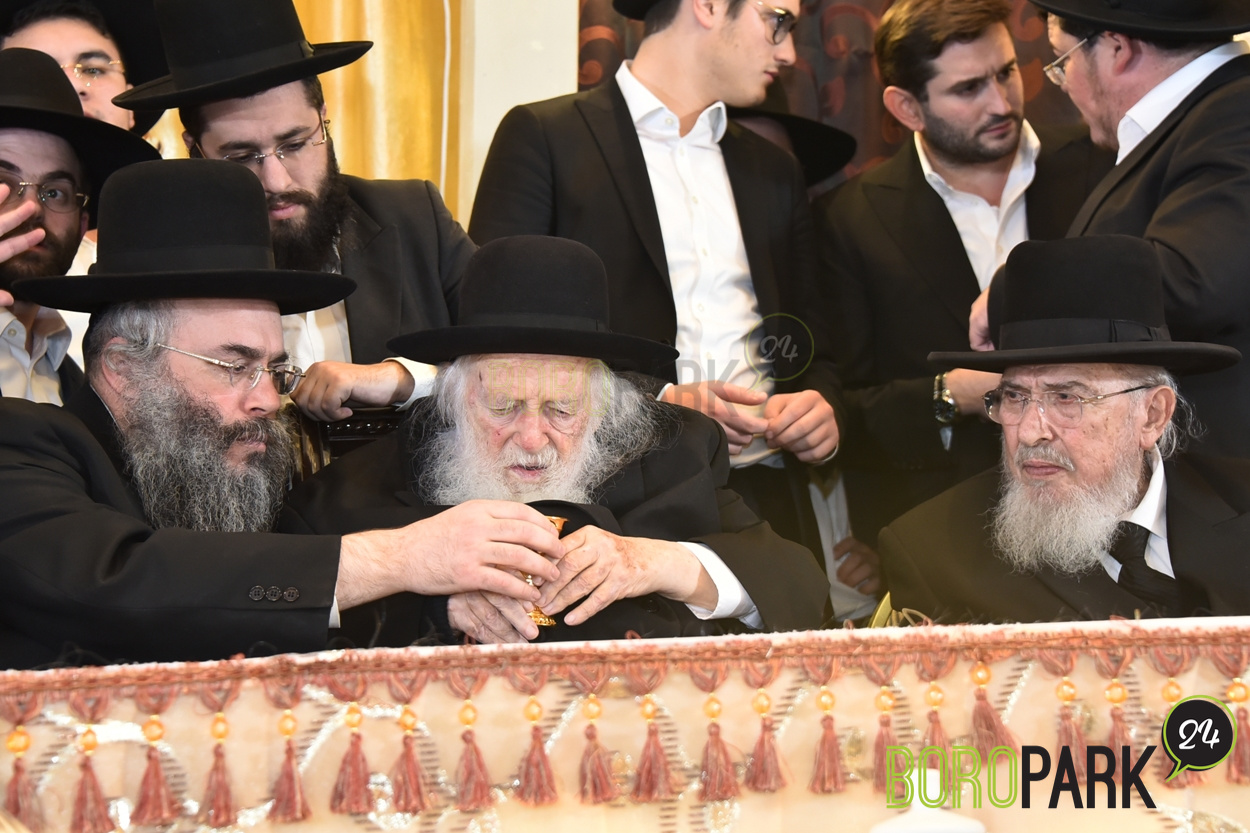 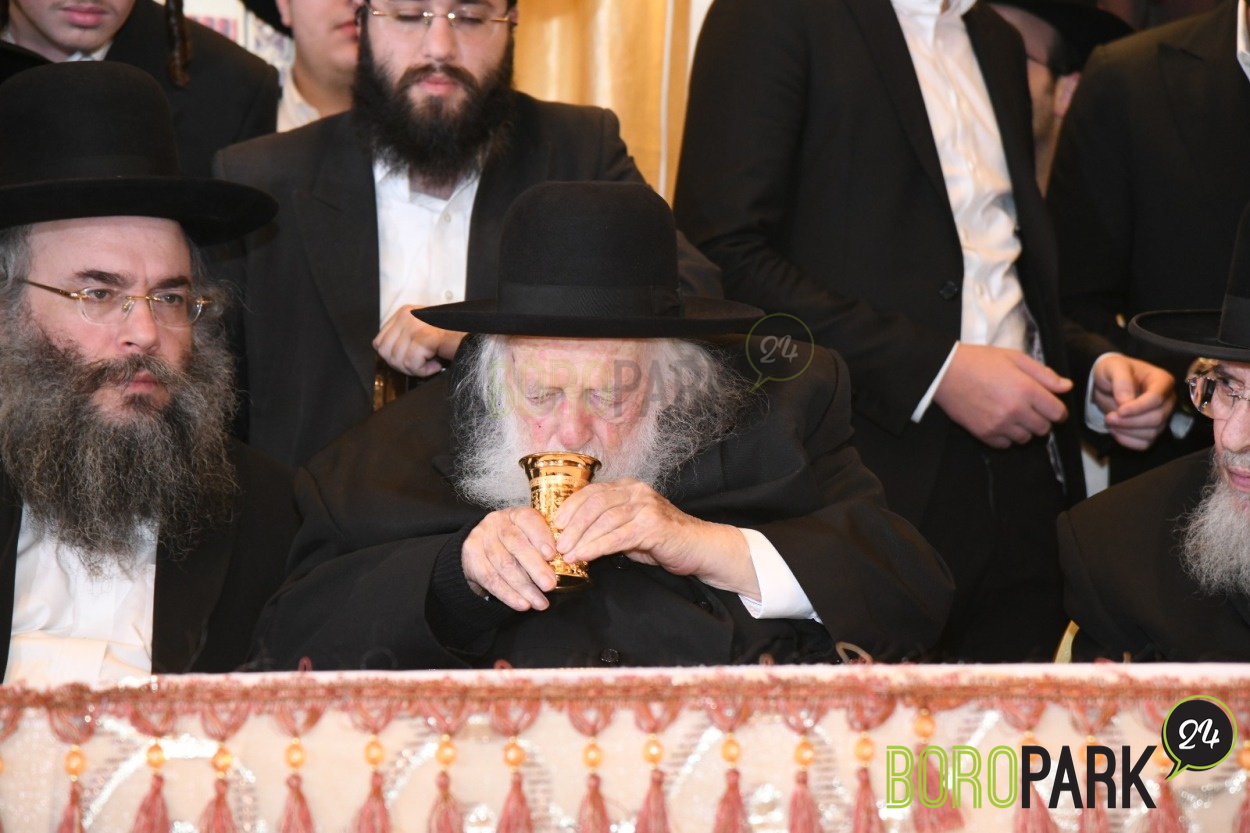 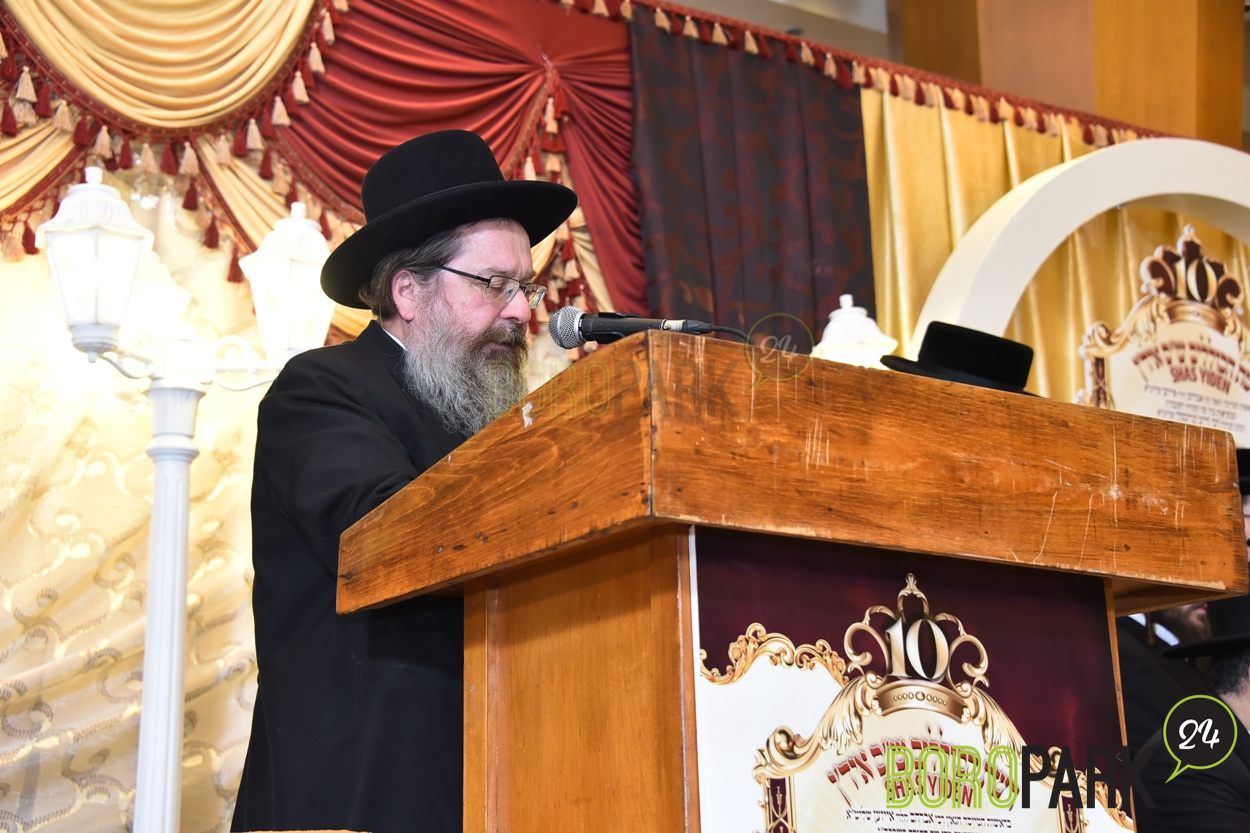 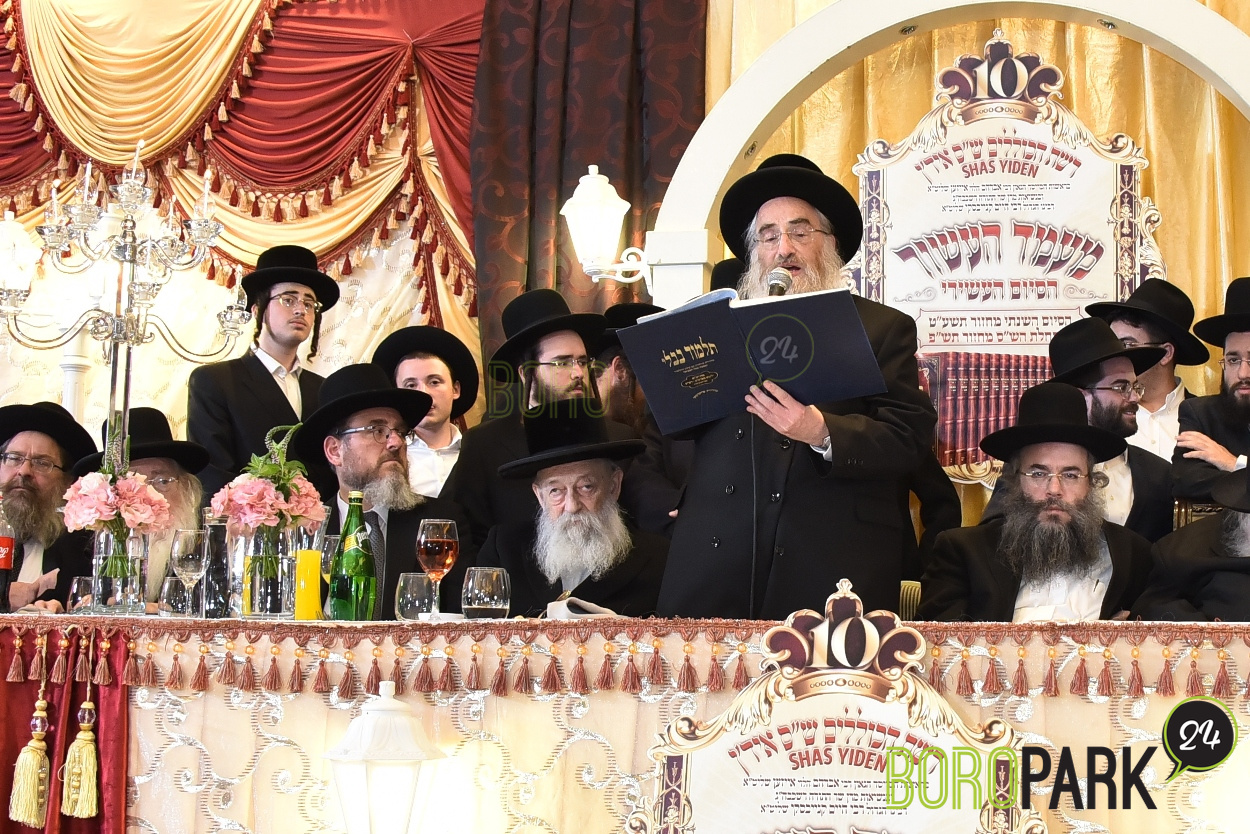 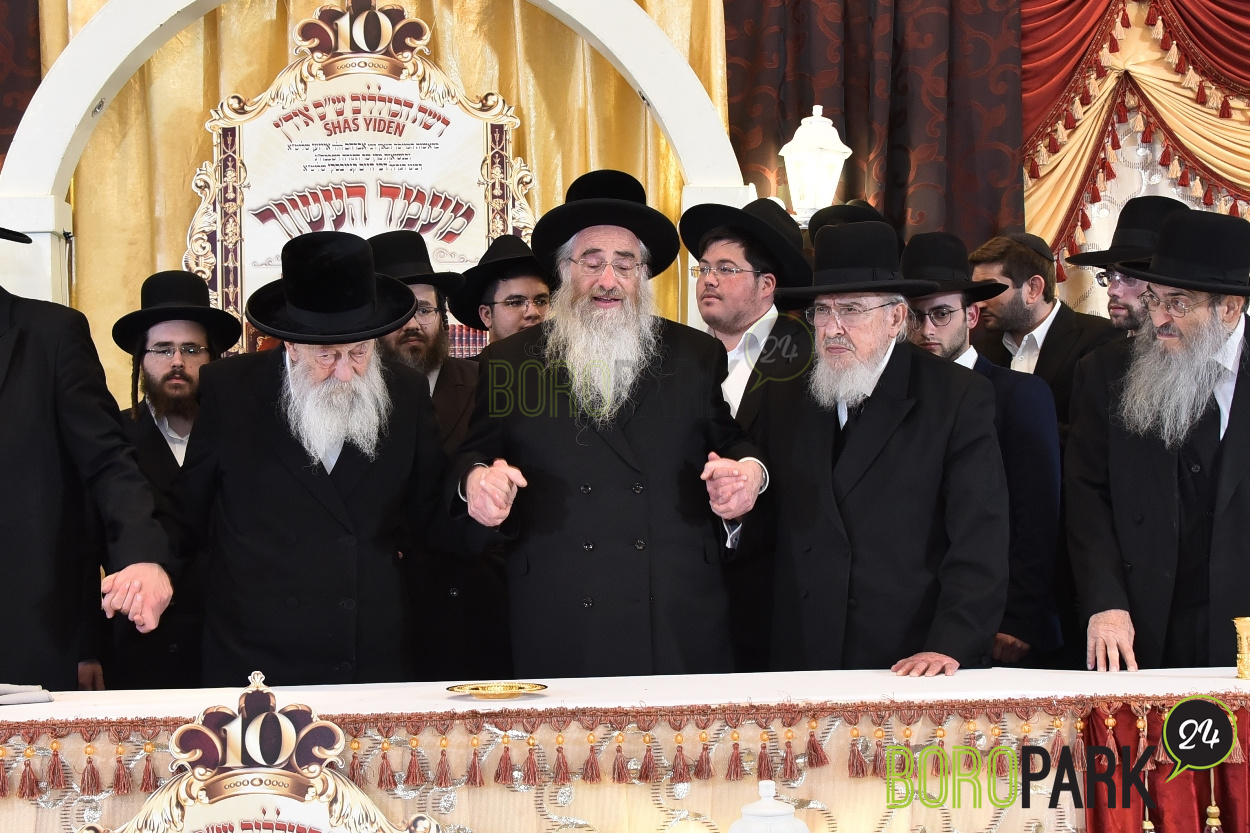 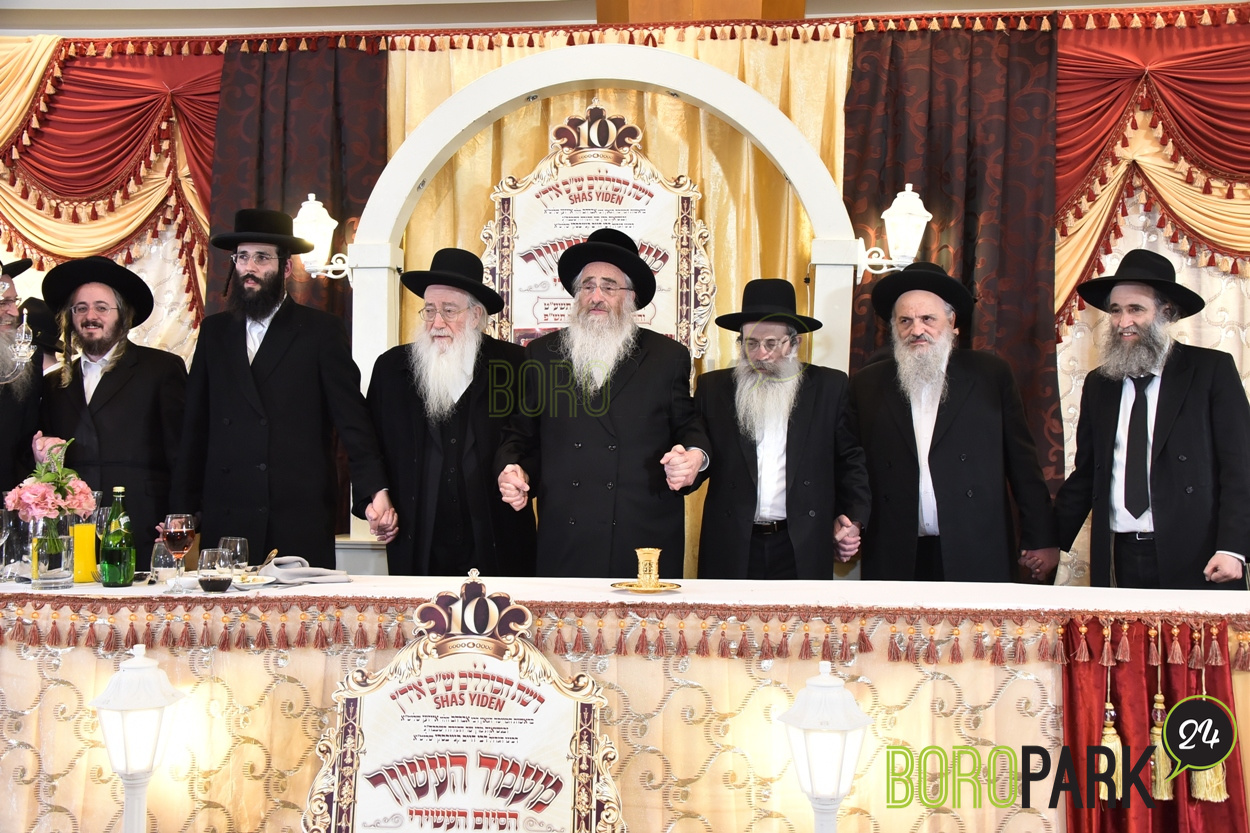 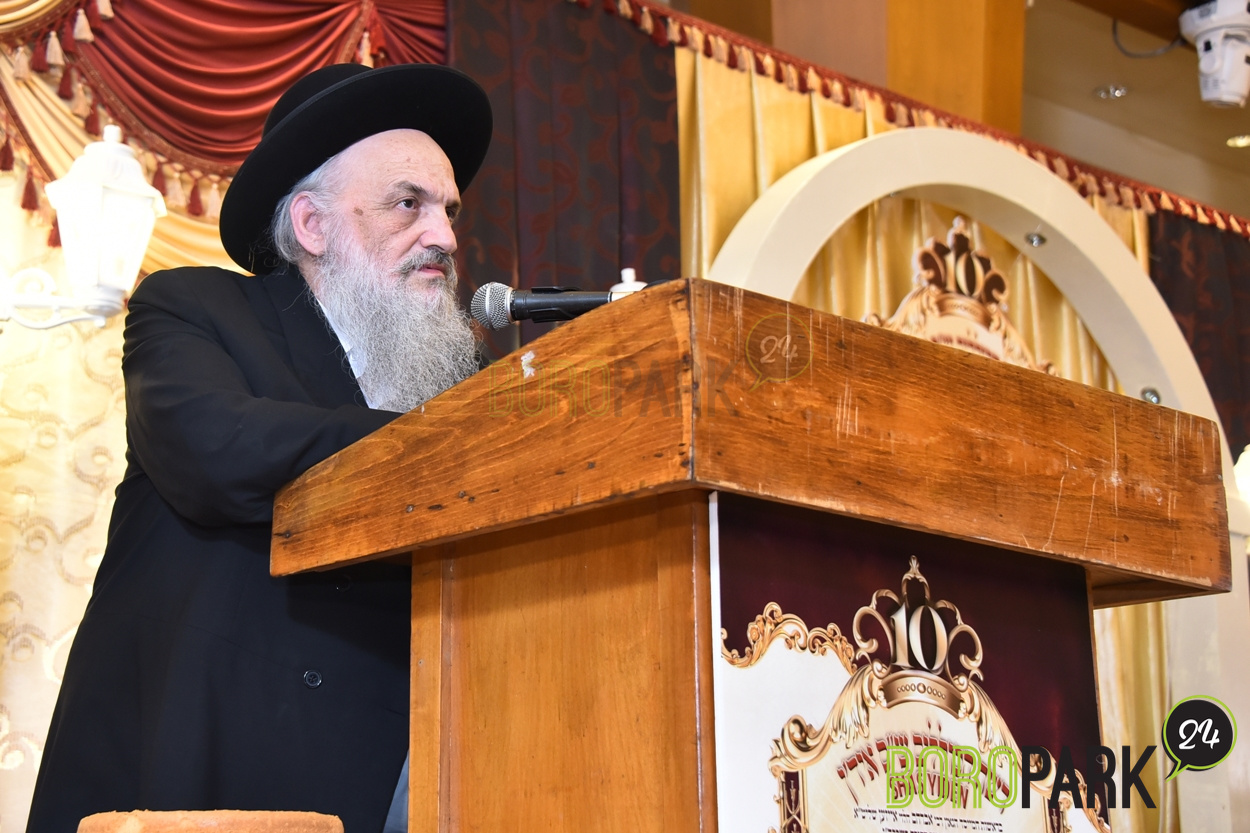 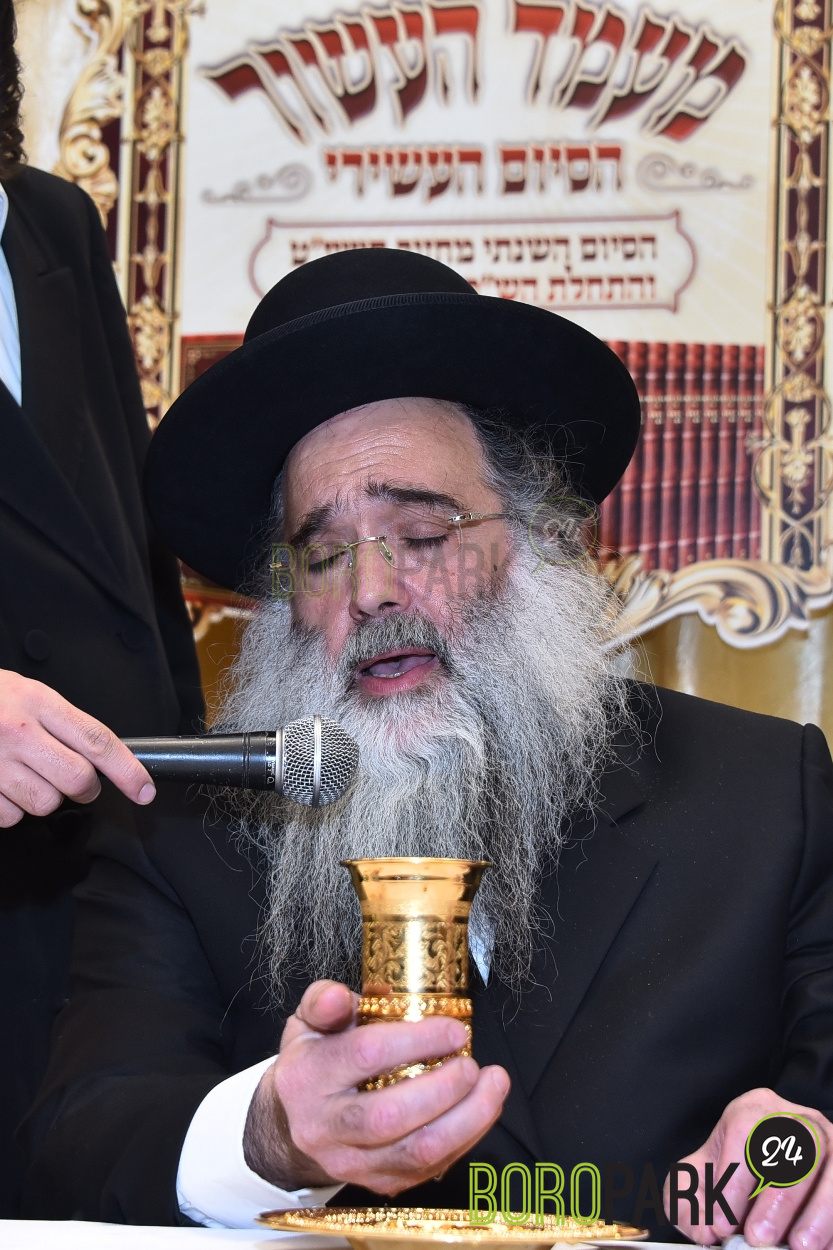 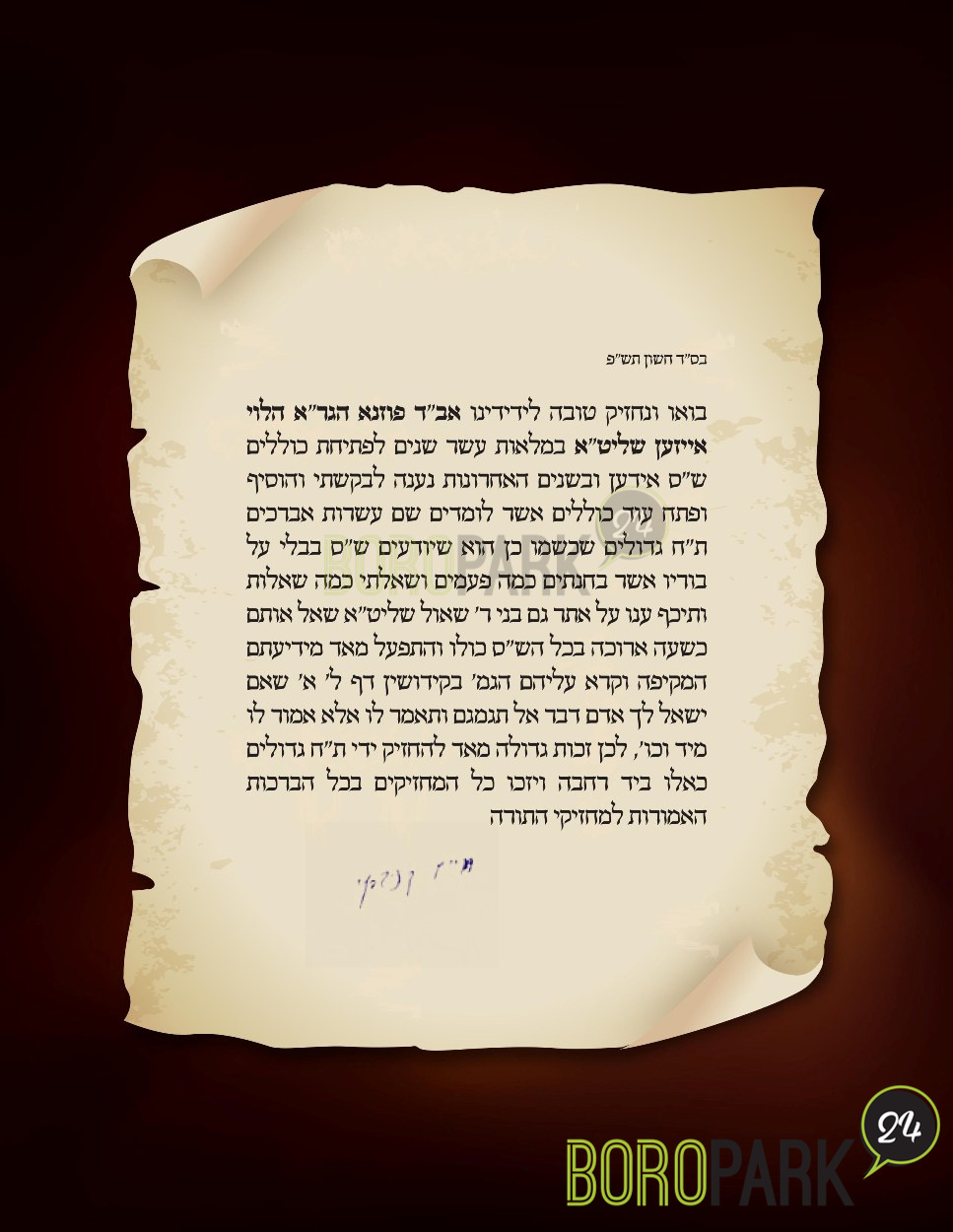