NYPD Sweeps 175 Illegal and Dangerous Dirt Bikes from the Streets

The ATVs, which are also called “light utility vehicles, quad bikes, or quads,” are vehicles that travel on low-pressure tires and handlebars for steering control.

“ATV’s & dirt bikes are illegal & dangerous to use in NYC,” Police Commissioner Dermot Shea tweeted Monday. “Use it & lose it.”

Since April 20, police officers have taken away 651 ATVs and dirt bikes from their owners, said police, who could not provide comparable data for prior years.

The dirt-bike crackdown follows last week’s hit-and-run that critically injured 4-year-old boy critically after a gang member on a gas-powered “scooter” slammed into him in a Queens park last week.

“No parent should have to endure such a senseless act,” Kim Royster, the NYPD’s chief of transportation, said at the time.

The hit-and-run perpetrator, who was charged, admitted to striking the child with his scooter. 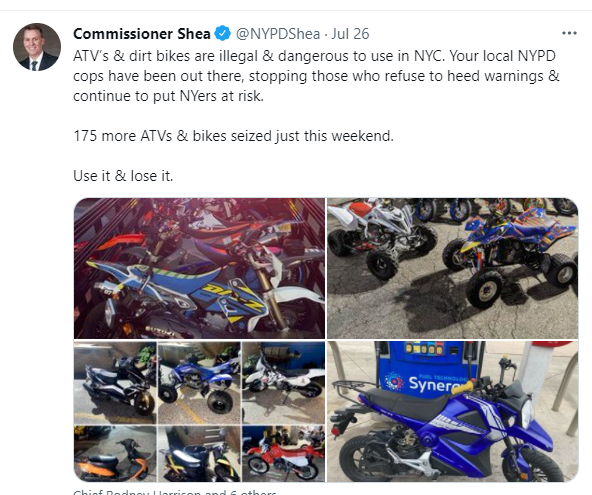