Seven months ago, after Danny Laniado and his business partner Gabi Peretz had to evacuate 15 employees out of their office when one worker wasn’t feeling well, the two childhood friends realized that COVID-19 had just shifted the economy, and they were going to have to do something different to make a living.

After the childhood friends, who grew up in Deal, NJ, and now both live in Brooklyn, found success together in businesses as varied as athletic apparel that includes therapeutic live magnetics, kosher juice bars in Green Point and Downtown Brooklyn, loan lending to small businesses, and brokering and managing multi-family homes in the Bronx, the two partners looked at each other as if to say, “What are we going to do now?"

[Peretz] looked at me and said, ‘What do you want to do? You want to go and disinfect people’s houses?’”

At that moment, a lightbulb turned on, Laniado loved the idea, and Germ Squad, a cleaning and disinfection service was born. The next morning, Laniado woke up, created Germ Squad’s logo on his phone, and jetted to Home Depot to buy out all the personal protective equipment (PPE) the store had on the shelves.

“No one had thought about the great need for sanitizing yet, so almost everything I needed was in stock,” remembered Laniado, who filled his cart with hazmat suits and gloves.

Through his considerable networking skills, Laniado, also connected with a farmer in Arkansas, who was selling electrostatic machines, which, once electrically charged and filled with sanitizers, are used to evenly spray, coat, and completely disinfect surfaces.

Because the electrostatic machines, which later sold for $2,500 each, were not yet in demand, the farmer sold Laniado 25 of the machines for $200 each, a deal Laniado called “a really, really big miracle.”

Now armed with a cache of the electrostatic machines, PPE, Laniado hooked up with a Canadian professor and inventor of the cleaning product Cpure, which is a patented and CDC-approved formula that includes microcrystals of titanium dioxide, which is activated by either natural or artificial light to sanitize surfaces. When Germ Squad administers  Cpure through the electrostatic machines, which spays the cleaning formula in a powerful mist, every crevice of surfaces can be cleaned, unlike the limited reach of cleaning one gets merely by wiping surfaces with rags, Laniado said.

Once the Cpure is sprayed onto surfaces, Laniado explained, and any overhead lights are turned on, hydroxy radicals of the Cpure get activated and continue to disinfect the surface even after the treatment is over.

During the COVID spike, Germ Squad did a lot of sanitizing in Boro Park.

“One day we came to clean for one person’s house, but then we ended up doing an whole entire block’s worth of houses because neighbors kept coming out and asking us to come in,” remembered Laniado, who now charges a flat rate of $299 for a typical house-sanitizing and charges spaces that exceed 5,000 to 6,000 square feet at a rate of .15 to .20 cents per square foot.

Laniado, who provided low-priced, flat-rate “specials” for regular cleaning for shuls, regardless of their sizes, over Yom Tov, recommends that shuls and offices still get completely sanitized once a week to remove germs and to increase everyone’s comfort level and confidence in feeling safe being out and about.

Germ Squad even leaves certificates that state when spaces been disinfected by Germ Squad Specialist: complete with an official recording of the date and time of the completion of the cleaning treatment, which Laniado points out that Germ Squad’s disinfection treatments do not preclude the regular cleaning that is necessary to remove dirt and germs.

“On a regular basis, you still have to do your standard cleaning, but the point is, you have to clean dirt and whatever dust particles are there, but in terms of micro-bacterias, our formula eradicates viruses, fungi, and any other types of bacteria.”

Although Laniado said that at the height of the pandemic in March and April, some sanitizing businesses were charging anywhere from 40 cents a square foot to $1 a square foot, he and Peretz decided that it was not a time to take advantage of people who were in distress.

The partners decided right away that their prices would be on the lower end, which was between 10 to 20 cents a square foot of surfaces to be cleaned.

“We built our business on the foundation that, ‘If you go for too much, you end up getting nothing, Laniado explained. "If you just grab a little, you can end up coming out with everything.’”

Because Laniado had such a large armory of equipment ready to use, Germ Squad was prepared right away to serve clients who needed to sanitize large areas, such as large homes, shuls, corporate companies, warehouses, factories, and nursing homes. “Baruch Hashem, we were able to cover anything and everything that was sent to us,” said Laniado, who explained that when they first started out, he was the one to put on the hazmat suit and gloves, and go use the electrostatic machines to clean people’s houses and spaces.

Now, Germ Squad employs three squads of three to four people each, but at first, Laniado was going out to clean alone.

“I suited up in the hazmat suit, and I went from place to place,” Laniado remembered with a laugh. “I got down and dirty. I decided that I would drop my idea of what I think I should be doing,” like sitting at a desk and working in an office.

Although it was dangerous, dirty work, Laniado described his time sanitizing as “great.” As he worked, Laniado took videos of himself sanitizing, posted them on social media sites, and in doing so, he generated enough business eventually to hire more people.

Because the risk of infection with COVID was so great, he had to be very careful. For instance, Laniado bought a car that was just for Germ Squad, and when returned home at 10pm from sanitizing since 6am, his wife would not let him touch anything in the house or talk to her or their children before hitting the shower, Laniado remembered with a laugh.

“I had to continuously disinfect the car and make sure all the tools were clean and thank G-d, I believe it is a miracle, but although I was exposed to COVID in many ways, I haven’t gotten it,” Laniado, who feels that Hashem protected him and took care of him as he worked because he “did it from a good place.”

When Laniado and Peretz first launched Germ Squad, they thought it would be short-term, six month project to get them through the pandemic, but as the team gained traction, it has started to branch out into additional types of cleaning services, such as mold removal, restoration cleaning, commercial cleaning, pet-related cleaning, and post-construction cleaning.

In fact, Germ Squad has so many ideas for ways to develop its business that the company is in the process of changing its name to “Serve Squad,” which will offer a variety of sanitizing services.

Although Laniado was glad to have work and to be of service to people during the most intense time of the lockdowns, he said that the work sometimes took an emotional toll.

“Twice, I had to clean the homes of widows, whose husbands had just died,” said Laniado, who said that sometimes after cleaning he just sat with people. “Many times we didn’t take payment. I just thought, ‘I am not taking money from you.’ You should find nechama.

Before he started cleaning, Laniado said that he often prayed that Hashem would help him to get rid of any of the COVID virus or any other germs in spaces.

“I thought, I am here, so G-d, c’mon, get rid of it,” Laniado said. “I was very into it. It was a good opportunity to just be of service and it was also parnassah, so I have no complaints.

“It is really, every day, a privilege to have a business like this, where we can service people and help them.” 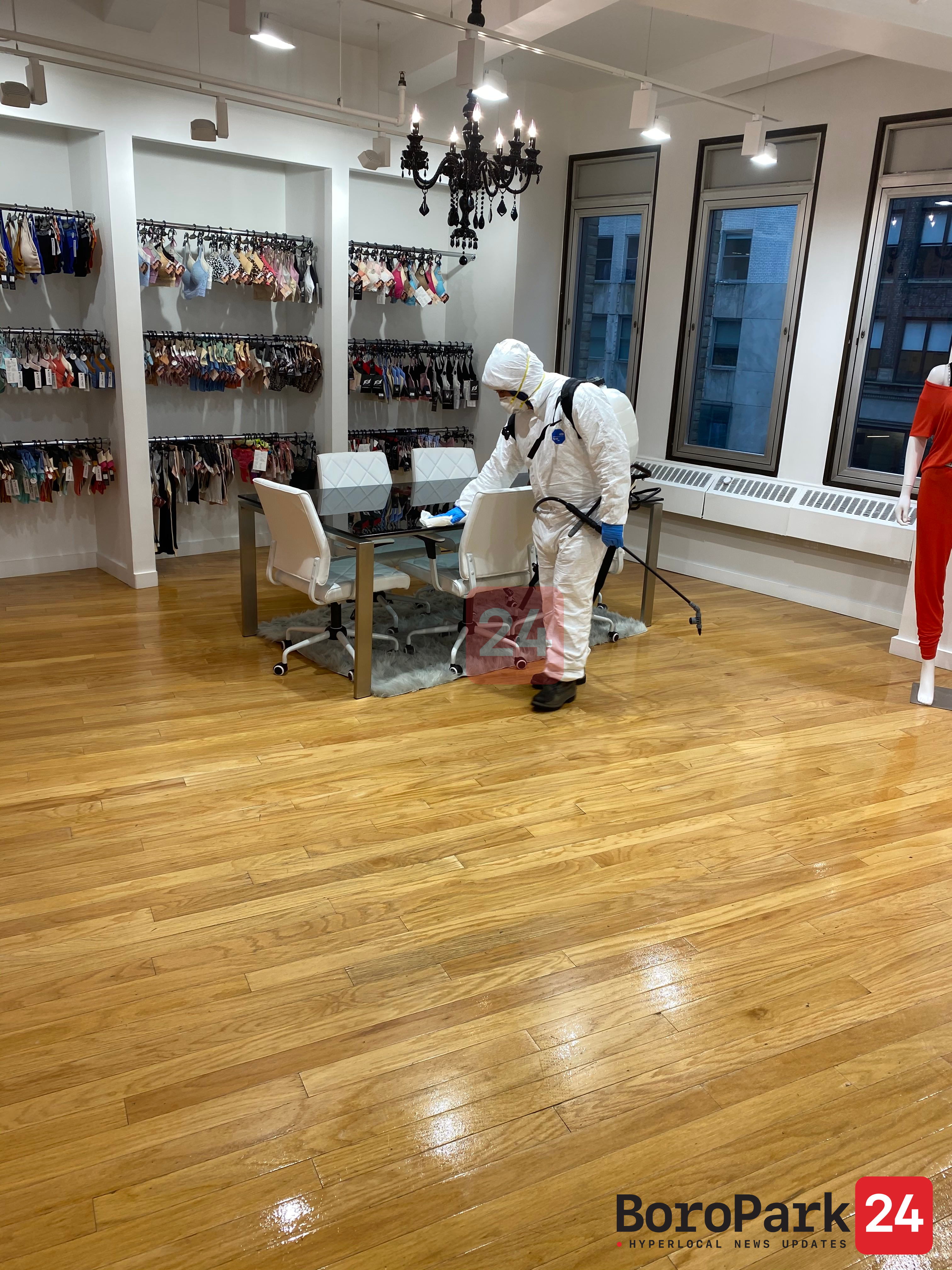 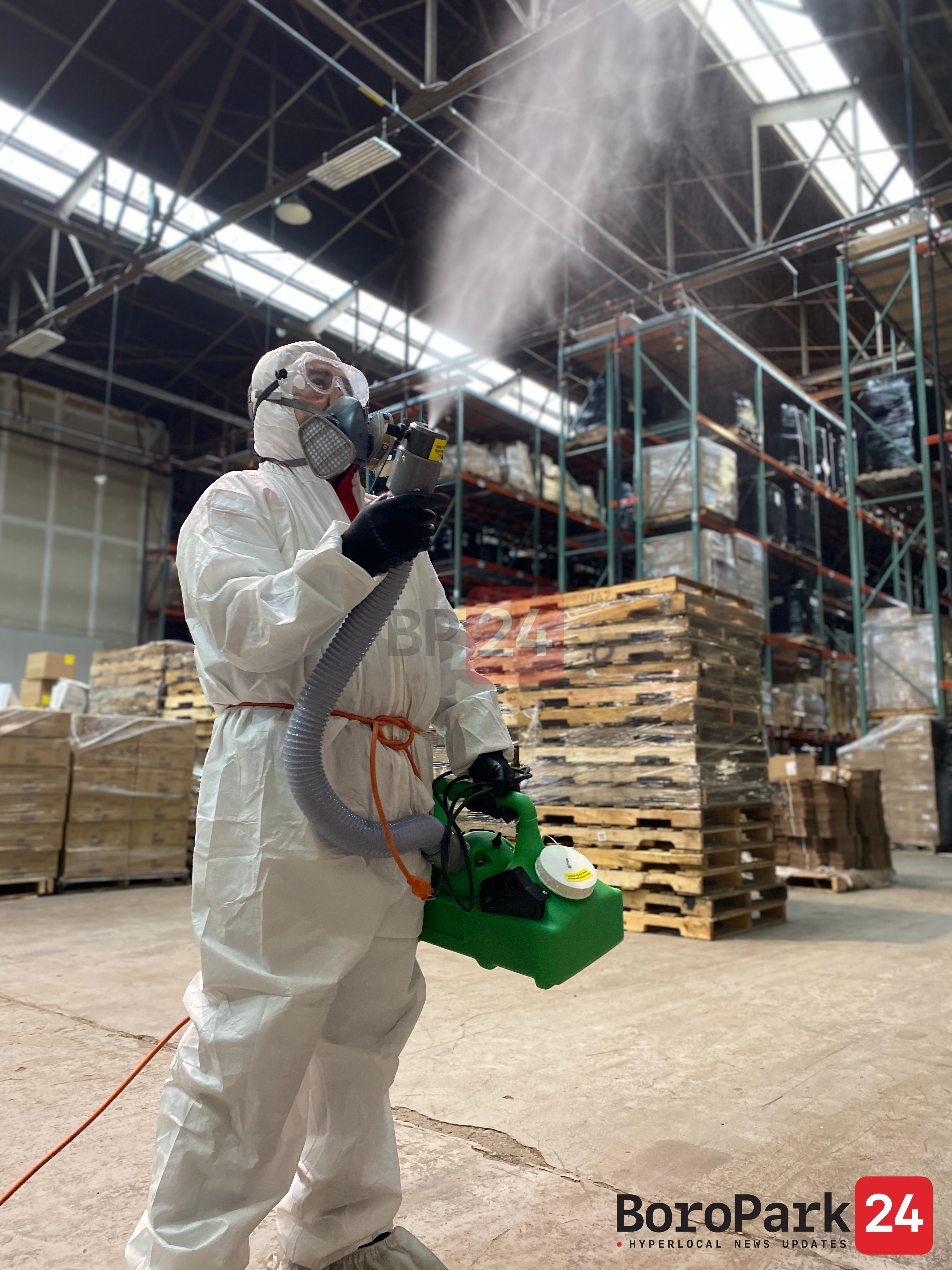 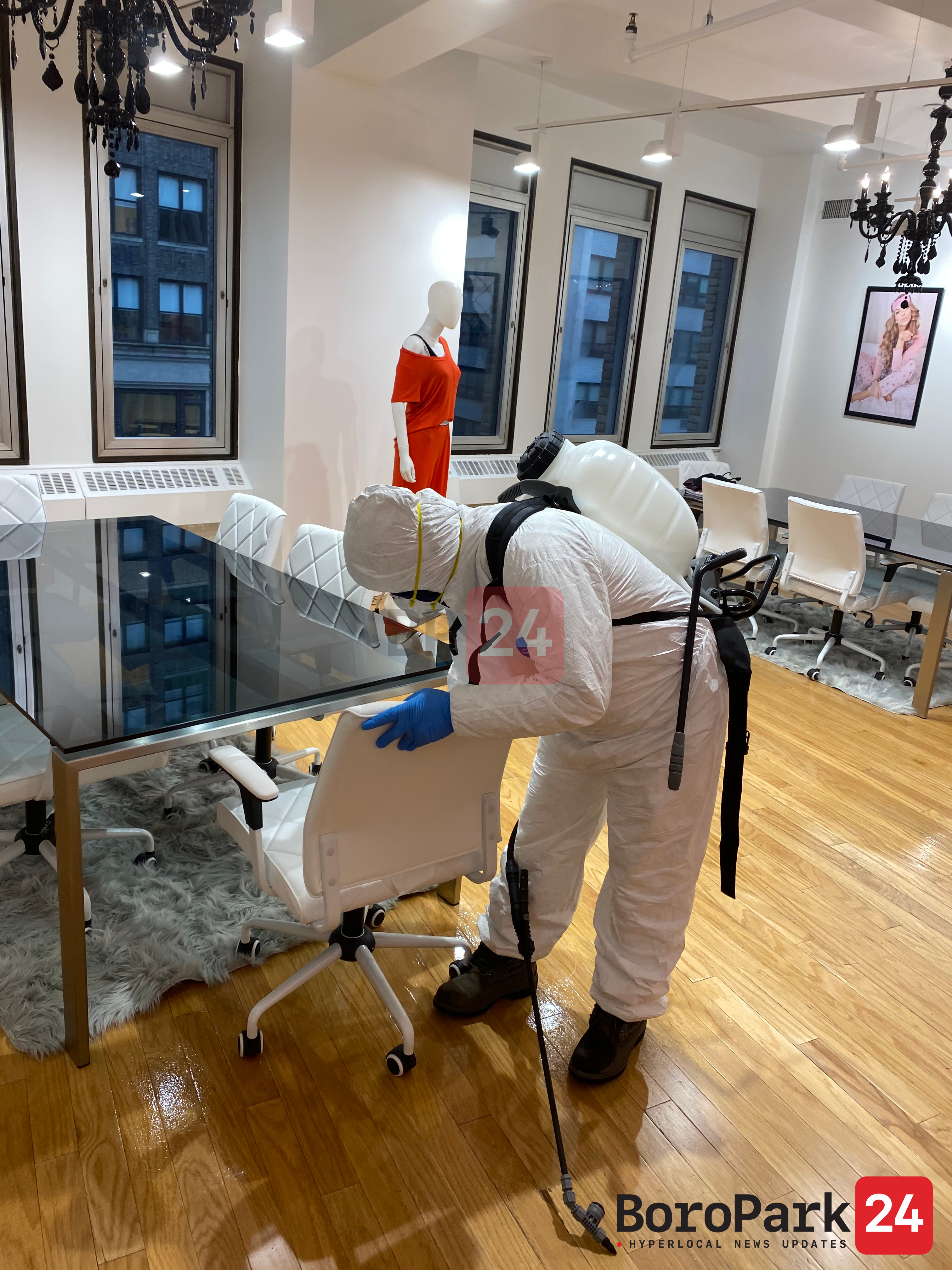 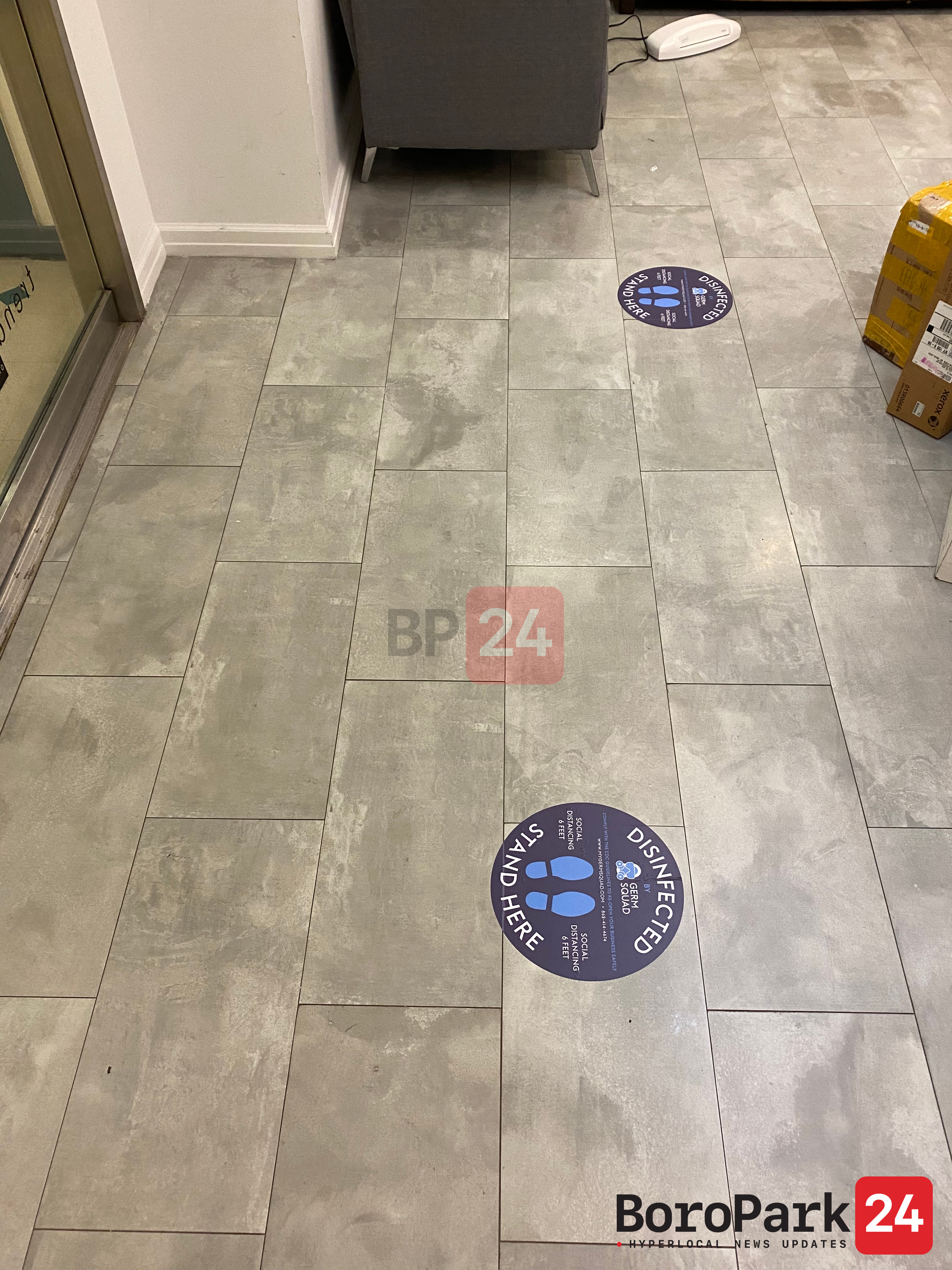 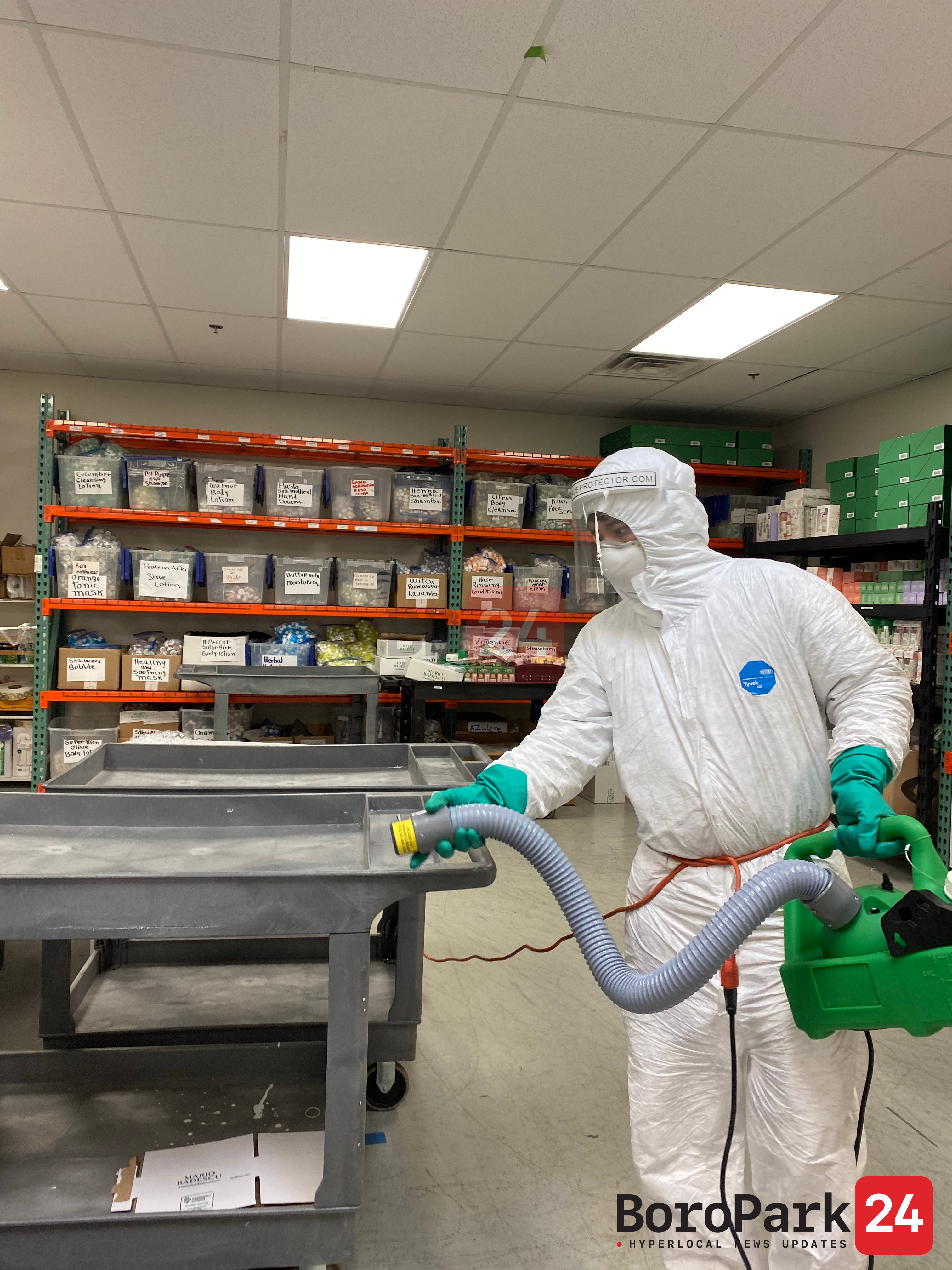 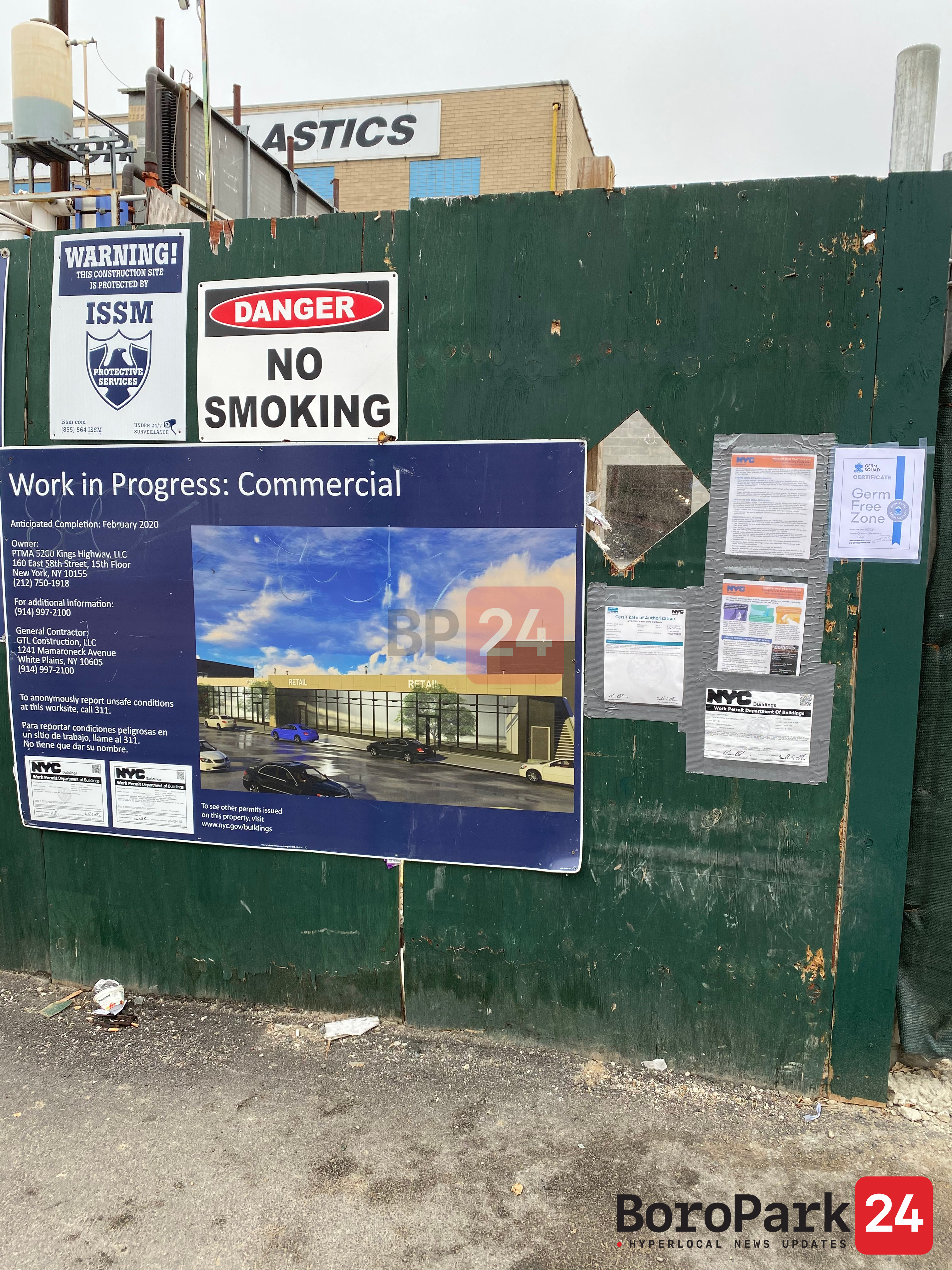 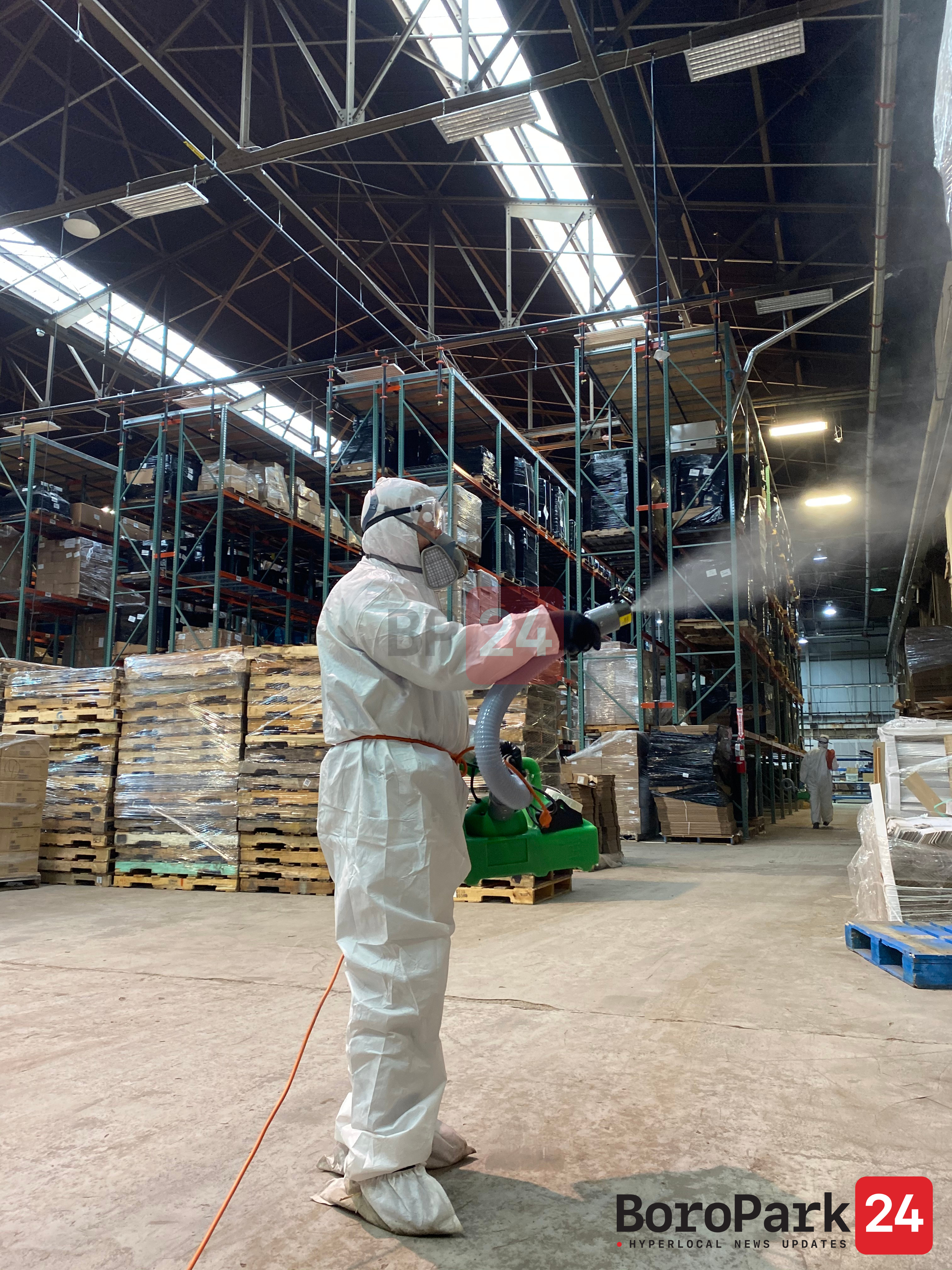 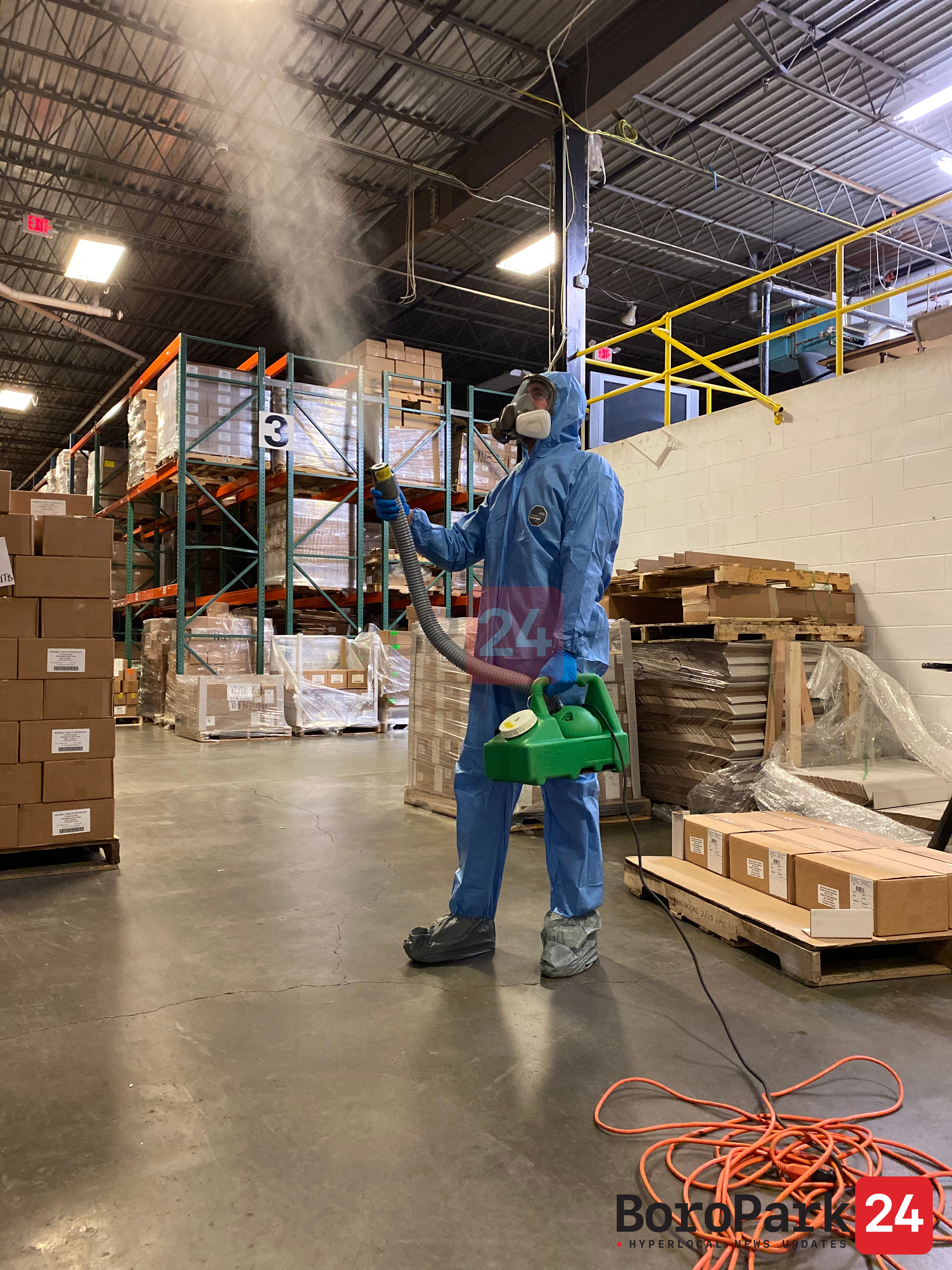 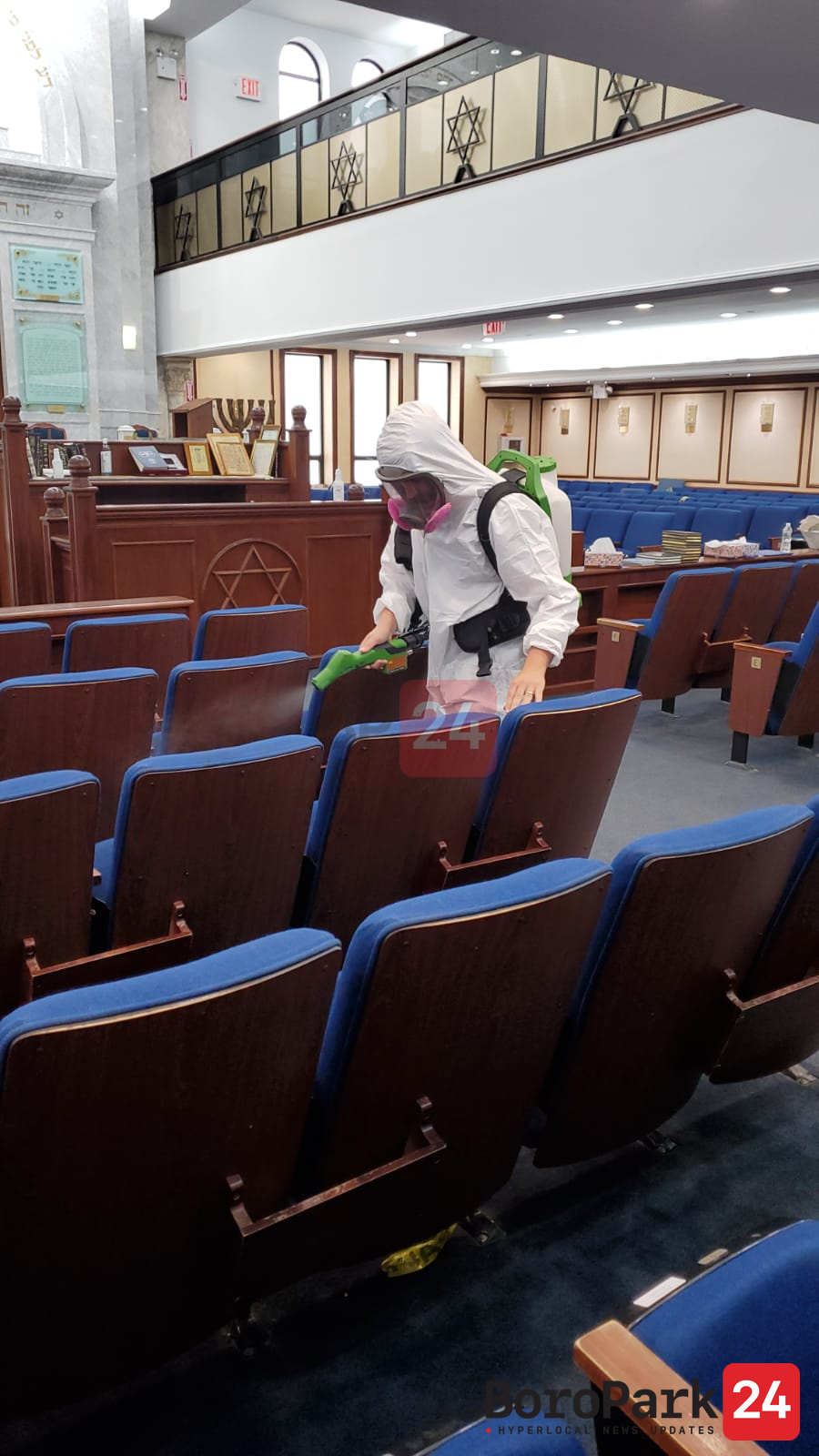 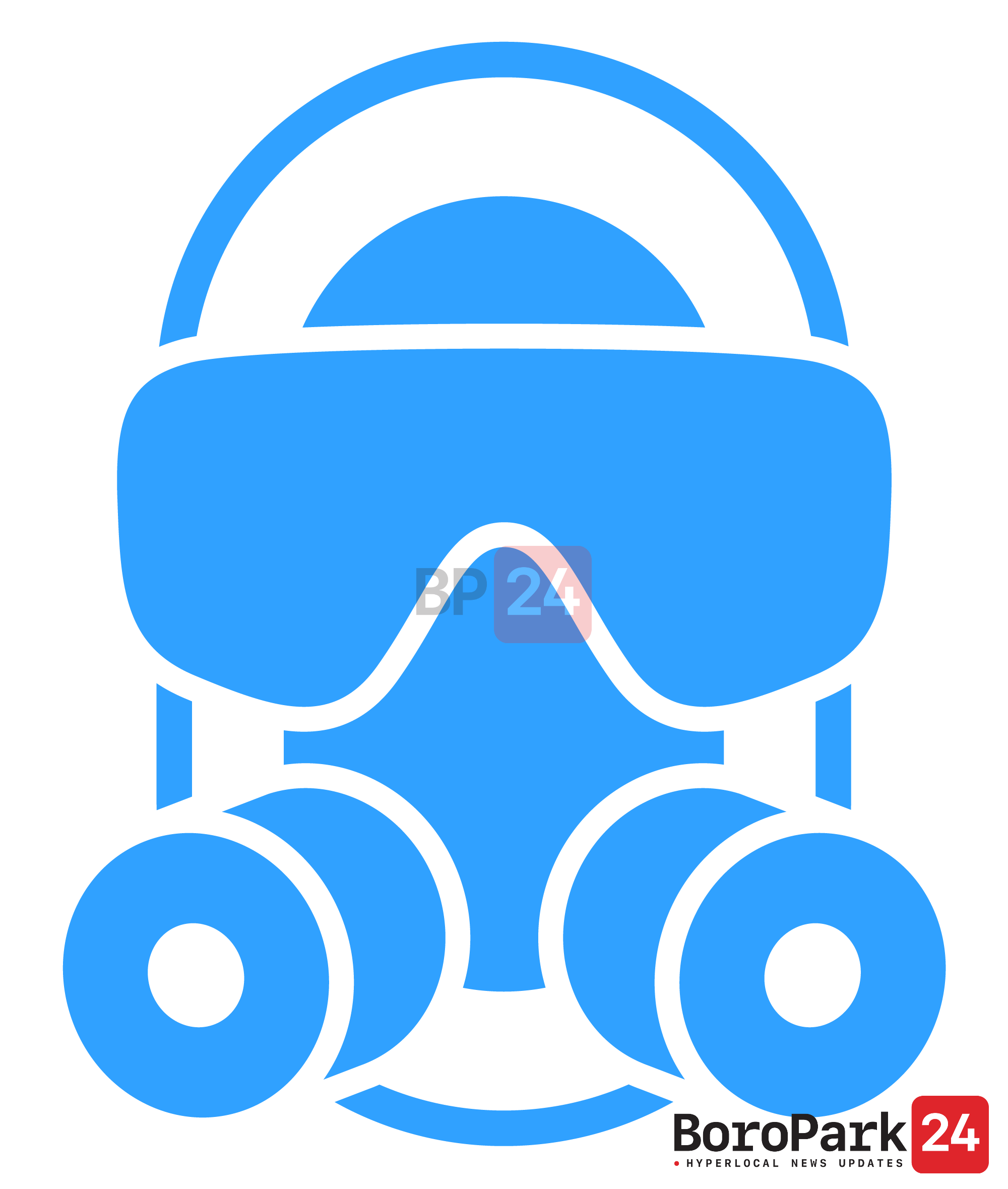