Rabbi Aryeh Schechter was so entranced by the beauty and meaning of sofrus when he was first exposed to it, when after his bar mitzvah, he came to board at Yeshiva Torah Va Daas in Flatbush.

While Rabbi Schecter’s family, along with many other Kopycznitzer Chassidim had left Poland after the war to land on the friendlier shores of Columbia in South America, the families of many of the other bochrim came from a variety of countries as well.

“The boys in the dorm came from all different places, with various backgrounds in Yiddishkeit, so the yeshiva would bring in a sofer each year to ensure that everyone’s tefillin were kosher,” said Rabbi Schechter who explained that he would sit with the sofer and ask many questions.

“Rabbi Aharon Berlin from Eretz Yisroel taught me how to write megillos,” Rabbi Shechter said with pride. “Also, our dorm mashgiach, Rabbi Avraham Talansky, z”l, once organized some extra classes for the boys who dormed and needed something practical and interesting to do after the classes of yeshiva were over. One of those classes was given by Rabbi Yossi Ostrich who gave a shiur on Hilchos STaM. I was intrigued.”

Rabbi Schechter explained that his rebbes at Yeshiva Torah Va Daas encouraged their students to put their talents and energies into learning and into to earning parnassah that derives from something related to learning, so he knew that sofrus, which was his passion, could perhaps one day become the source of his parnassah.

Rabbi Schechter does not only write and check Sefer Torahs, Tefillin, Megillos, and Mezuzahs, but along with who along with Rabbi Uri Auerbach, he has written a sefer called Pischei Shearim, a helpful book on Hilchos Mezuzah.

Rabbi Schechter, who has also published various kuntreisim, is so well-known and well-regarded that sometimes he is flown to out-of-town communities to check the tefillin and mezuzahs of sometimes one family or other times, entire communities: opportunities that Rabbi Schechter often uses to teach a shiur on Hilchos Sofrus and/or Hilchos Mezuzah for the men and the boys in the community he is visiting.

“Just as I did, the boys love to learn what makes tefillin and mezuzahs kosher,” said Rabbi Schecheter, who added with a laugh that because he is flown around to check people's mezuzahs, sometimes he is referred to as “The Flying Sofer.”

How often are Yidden not putting on their tefillin in the right way?

“Very often,” said Rabbi Shechter, in a deadly serious tone that reveals how much he cares about the holy mitzvah of putting on tefillin.

“The correct placement on the head must be centered on the forehead, above, and not below, the hairline,” said Rabbi Schechter, who does not charge any additional fee for checking the placements of his customer’s tefillin, described the correct place of tefillin as a matter of “millimeters.”

For men who do not live in town and who may be curious about the correct placement of their tefillin, Rabbi Schechter also uses FaceTime to assess the tefillin of anyone who would like his expertise.

“Also the mizbechos, both outside and inside the Beis Hamikdash, are perfectly square,” Rabbi Schechter explained.

A beautiful perk of his job of sofer and checker of all holy writings, Rabbi Schechter is often called on by roshei yeshiva and gedolim to check tefillin and mezuzahs, not just in their homes, but of entire institutions.

One such client from whom the sofer had the privilege to learn was HaRav Avraham Pam, z”l, whom Rabbi Schechter said always tipped his assistants, even before he paid the mezuzah checking fees.

“Rav Pam used to tell us,” Rabbi Schechter remembered, “that being a sofer can be a sakanah because his job is to find problems and mistakes, and this can, G-d forbid, affect a person in a negative way, such as letting ourselves focus on imperfections or G-d forbid, on ‘knocking the work’ other sofrim. We should take care to stay positive.”

Customers can have their tefillin or mezuzahs checked by Rabbi Schechter either by stopping by into his office, which is located at 1558 41st St., by insuring and sending them in, or by calling (917) 628-5475 for house calls for which Rabbi Schechter takes along a crew of three bochrim and drives his truck to people’s homes. For $100, Rabbi Schechter and his crew take down all the home’s mezuzahs, checks them, and re-affixes them.

Within three hours, Rabbi Schechter finds anything and everything that can be wrong with tefillin and mezuzah scrolls.

“When I make house calls, I never know what I am going to find,” Rabbi Schechter said warmly, but without judgement.

For example, one family who wanted its mezuzahs checked, Rabbi Schechter remembered, had a little bit of Jewish knowledge, but not that much. He said he came into the house, but he did not see any mezuzahs before asking, “Where are the mezuzahs you would like me to check?”

The rabbi was then directed to the doorways of the bathrooms, which, for some reason, was the only location in which the family thought mezuzahs were needed. Of course, after checking the scrolls, the rabbi helped the family to relocate its mezuzahs.

Other times, all that is wrong with mezuzahs is that they are, unfortunately, hung upside down in their cases.

Although turning over mezuzah scrolls that are accidentally hung upside down are easy enough to correct, doing so can have powerful effects. For example, before one woman who was expecting, called to have her mezuzahs checked, she heard the stressful news that her baby was both in a breech position and testing abnormally, G-d forbid. While checking the scrolls in this woman’s home, Rabbi Schechter saw that  the mezuzah scroll that was affixed outside the couple’s bedroom had been hung upside down. Rabbi Schechter flipped the mezuzah scroll, and re-affixed it, and Baruch Hashem, he later heard that the baby had miraculously turned itself around, and Baruch Hashem, was born healthy.

One particularly shocking example of a mistake in a mezuzah scroll was brought to Rabbi Schechter by a woman, who was quite disturbed that her son had broken his foot three different times in his yeshiva in one year.

Although having the mezuzahs in her home checked, the mother brought in a mezuzah that was hanging in her son's yeshiva. When Rabbi Schechter examined the scroll, he noticed that the “foot” of the gimmel in the word “deganecha” had faded or “broken,” off.

Explaining to the mother that gimmel has a numerical value of three, he attributed his three accidents to this imperfection in the yeshiva’s mezuzah.

“If bad things are happening, people should consider whether they are getting their mezuzahs and tefillin checked regularly, at least every three and a half years,” said Rabbi Schechter, who added that some rosh yeshivos ask him the check the mezuzahs of their yeshivas every single year.

Rabbi Schechter added that he has many clients who live in Crown Heights, as per its community’s tradition that mezuzahs and tefillin should be checked every Elul.

Heshy Rubinstein, a photographer for BoroPark24.com, added that even mezuzah and tefillin scrolls bought in heimish, reputable stores in town should be checked with regularity by trusted sofrim, like Rabbi Schechter.

For instance, when Rubinstein’s son Shimmy, also a well-known photographer and his wife moved from Boro Park to Toms River, N.J., they had their store-bought mezuzahs checked by Rabbi Schachter, who surprised the couple when he told them that all the scrolls were shvach and needed to be replaced, said Rubinstein, who added that he is still touched by Rabbi Schechter’s generous willingness, 18 years ago, to lend him a much-needed kosher Megillas Esther every Purim for 10 years, when Rubinstein served as the rabbi for the Derech Emunah shul in Rockaway.

“The Shlah HaKodesh says that mezuzahs are shemirah: protection,” said Rabbi Schechter. “The Shla said that if things are not going the way they are supposed to, then maybe the guard is not doing its job.”

“A lot of times, when we fix the problems we find in mezuzahs, people find that things get better,” Rabbi Schechter said. “The Ramban says that before a person runs to a doctor, that person should run to the Tehillim, the Tefillin, and the Mezuzahs, and only afterwards, if everything is fine, should that person go to a doctor, but not before.”

There is story from the Gemara, the sofer said, in which King Aretwon of Persia, a non-religious Jew, gave Rabbi Yehudah Ha Nasi a beautiful and priceless gem as a gift of friendship.

“In return, Rabbi Yehudah ha Nasi sent him a mezuzah, which when the king of Persia received it, he asked, ‘I sent you jewelry, and I you sent me a piece of parchment with some writing?’”

“So, Yehudah ha Nasi said, ‘You gave me something that is going to cost me now insurance; now I need police and soldiers to guard the jewelry that you gave me.

“But I sent you something that is going to guard you and your kingdom because the mitzvah of mezuzah is a shmira.” 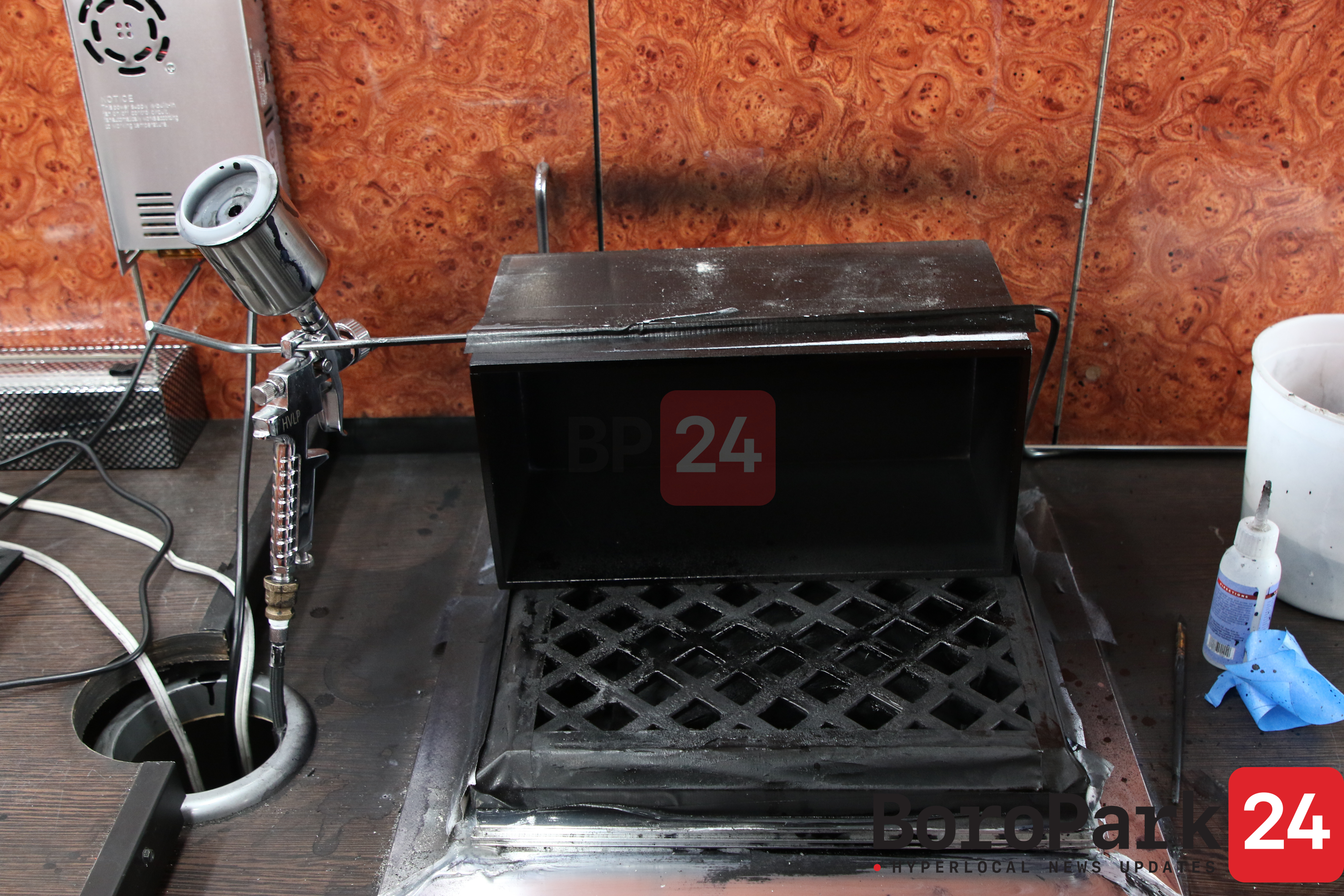 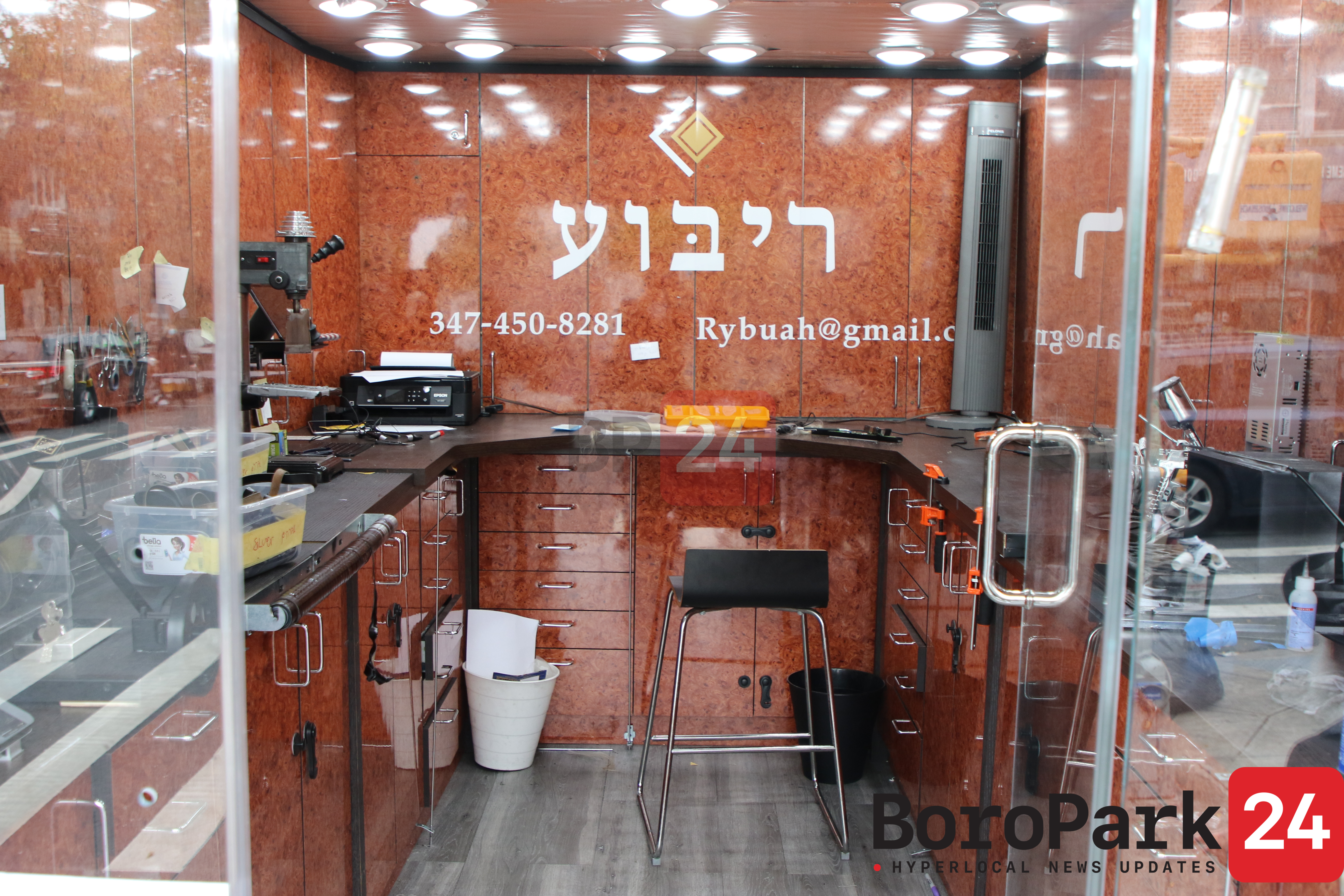 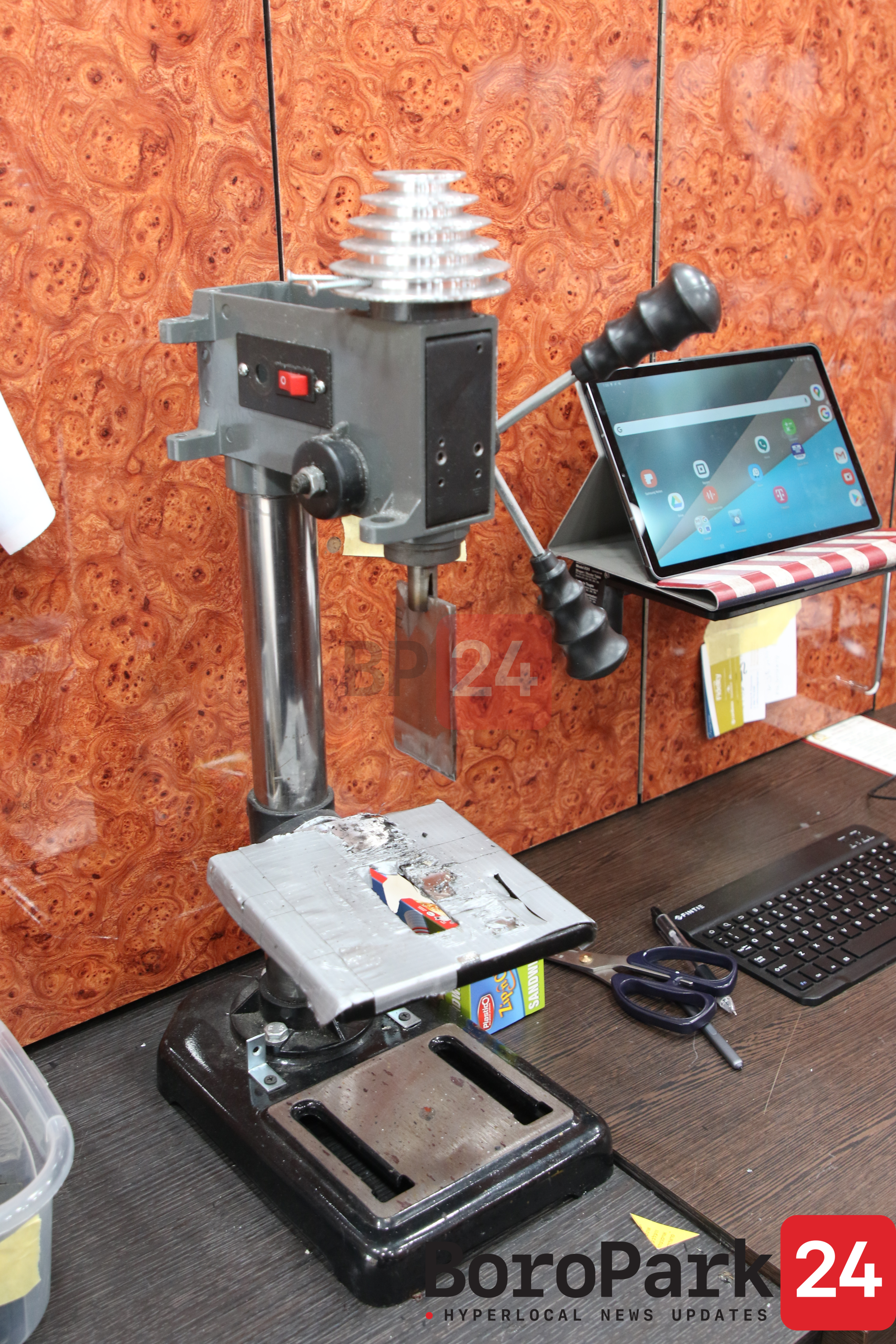 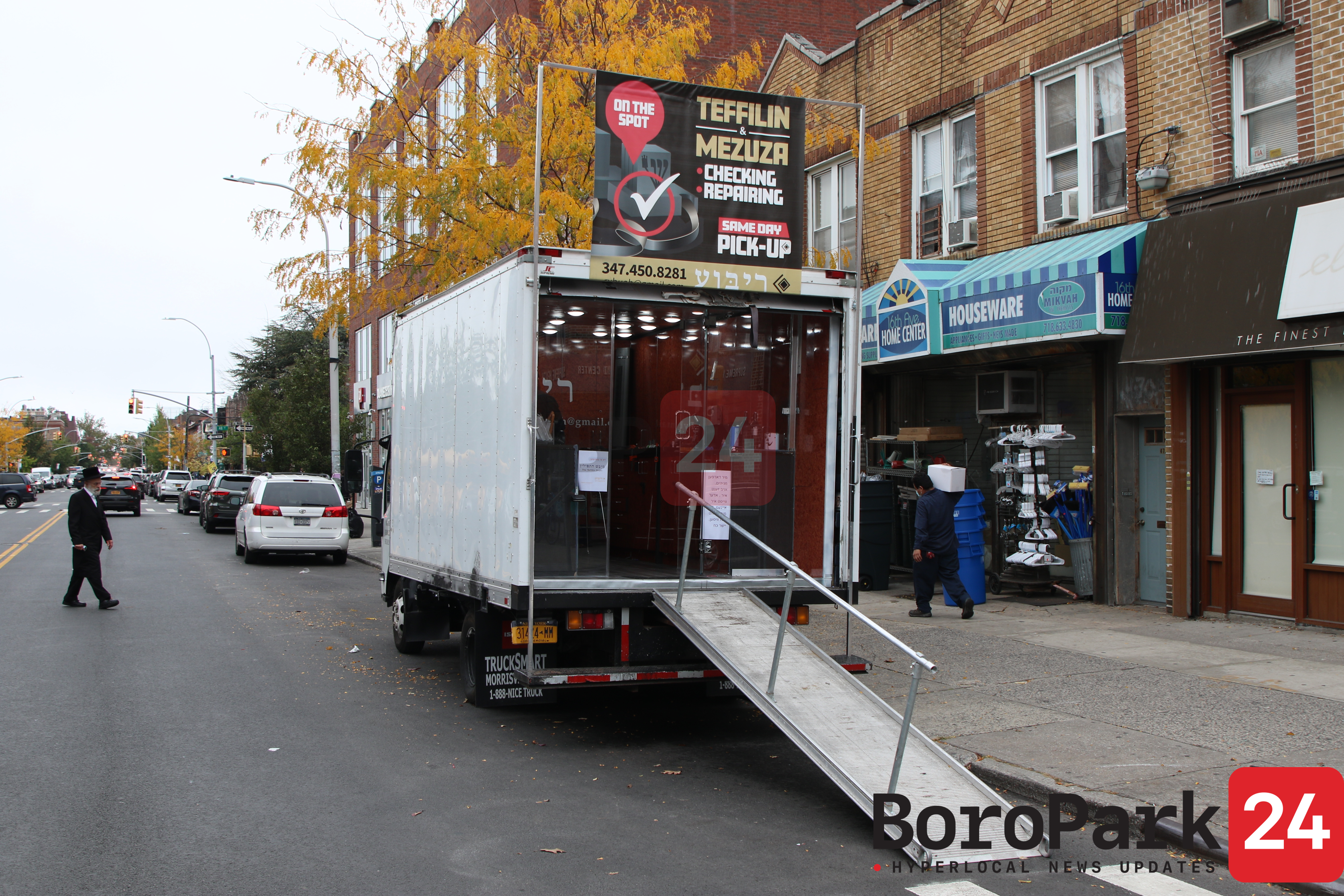 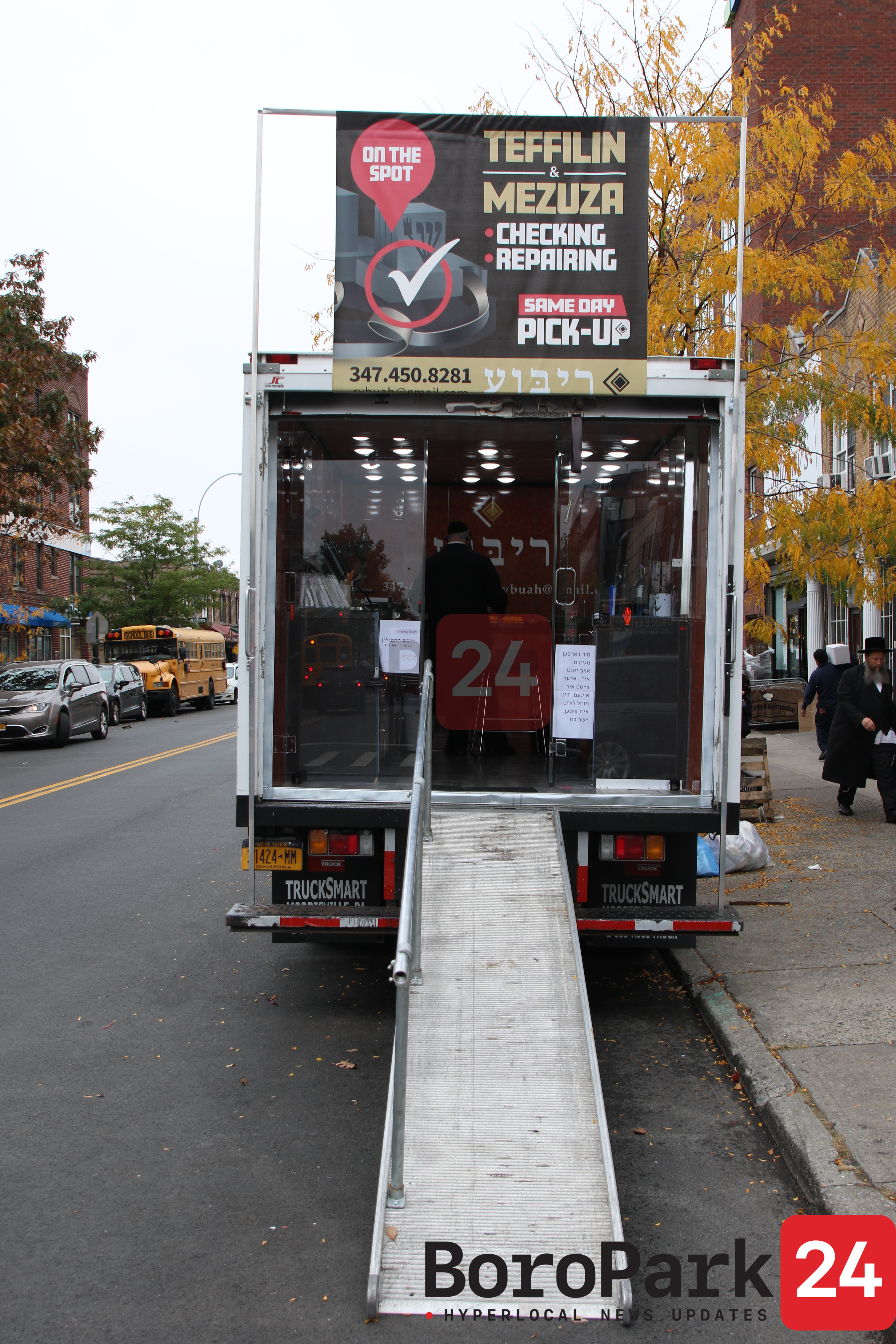 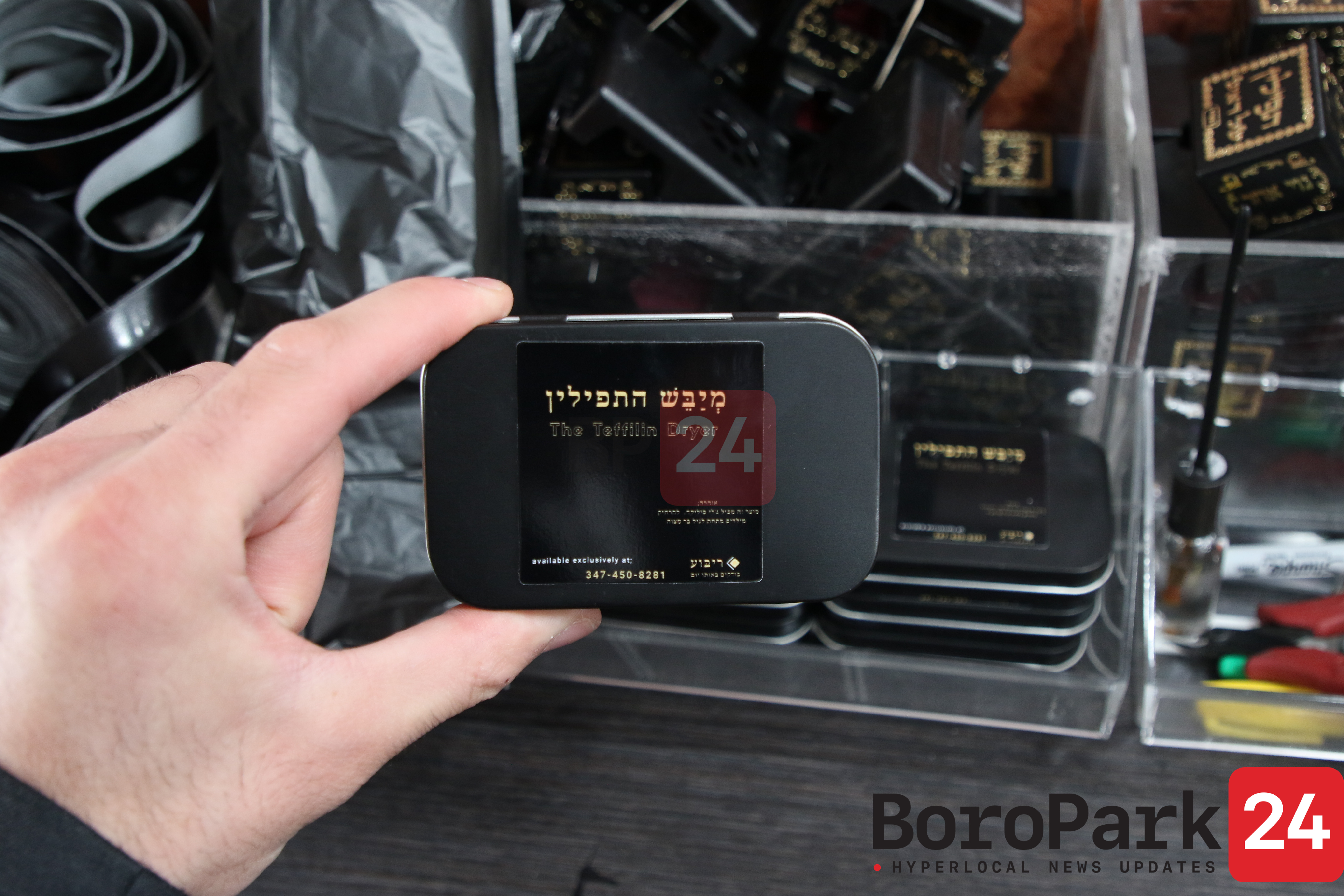 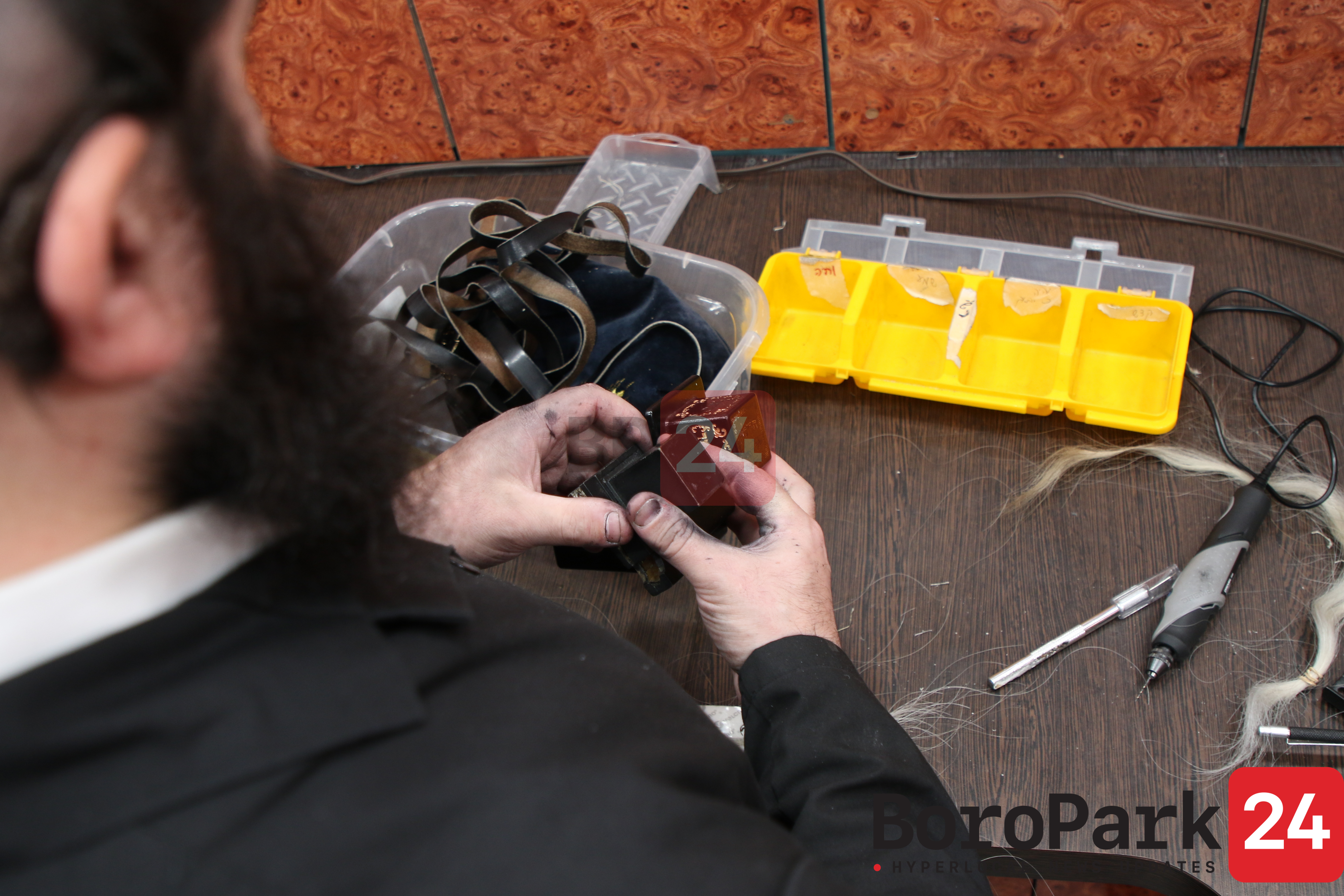 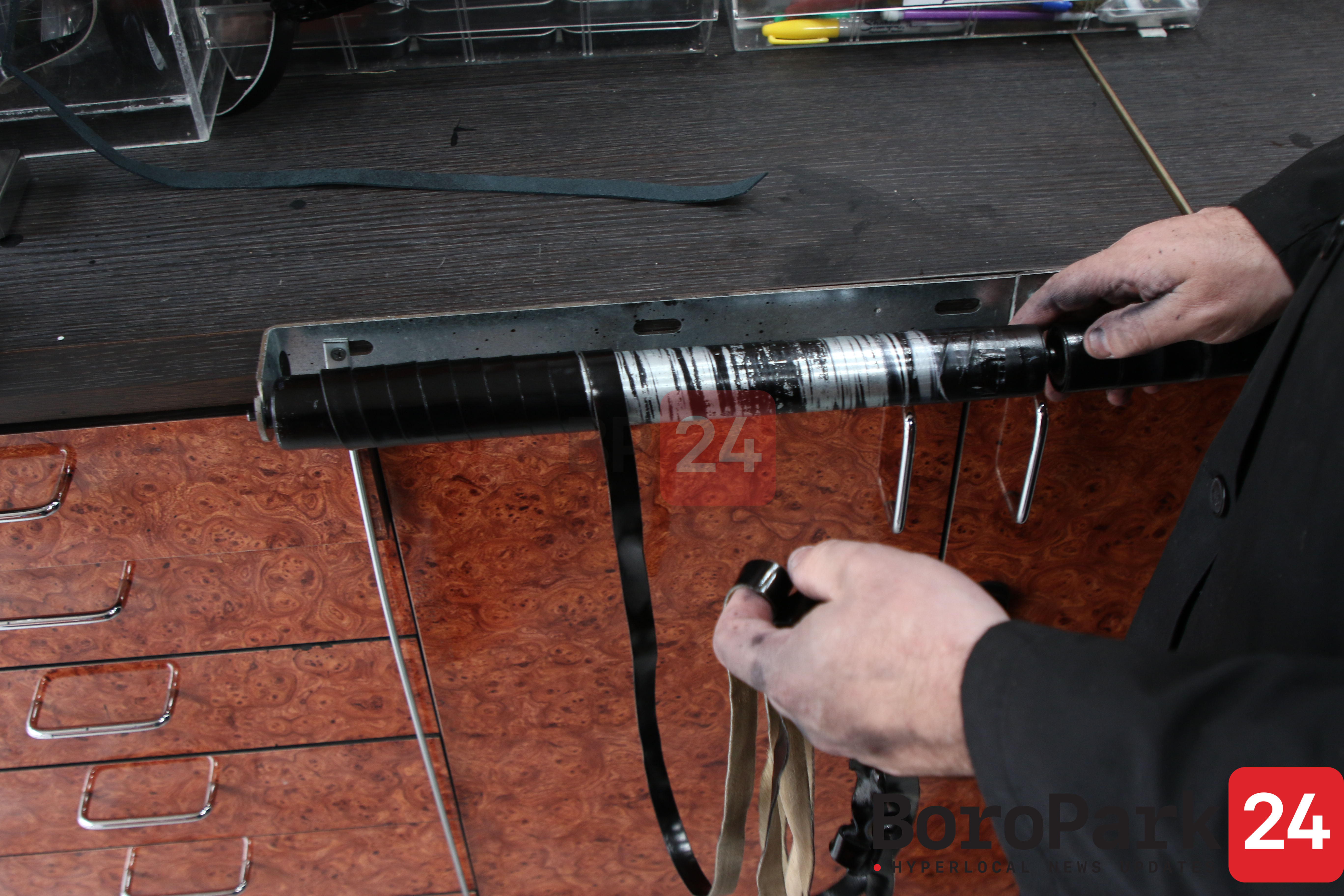 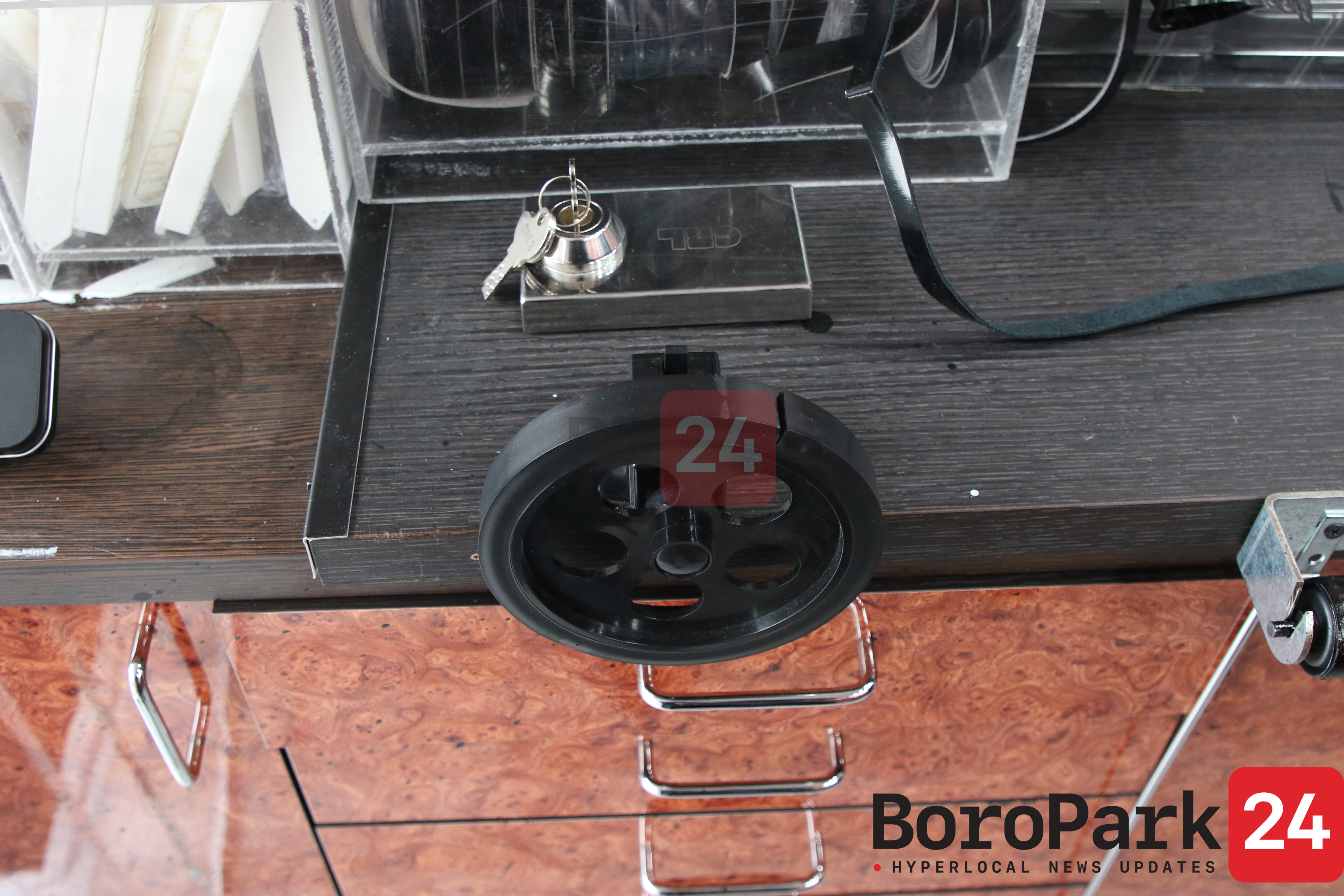 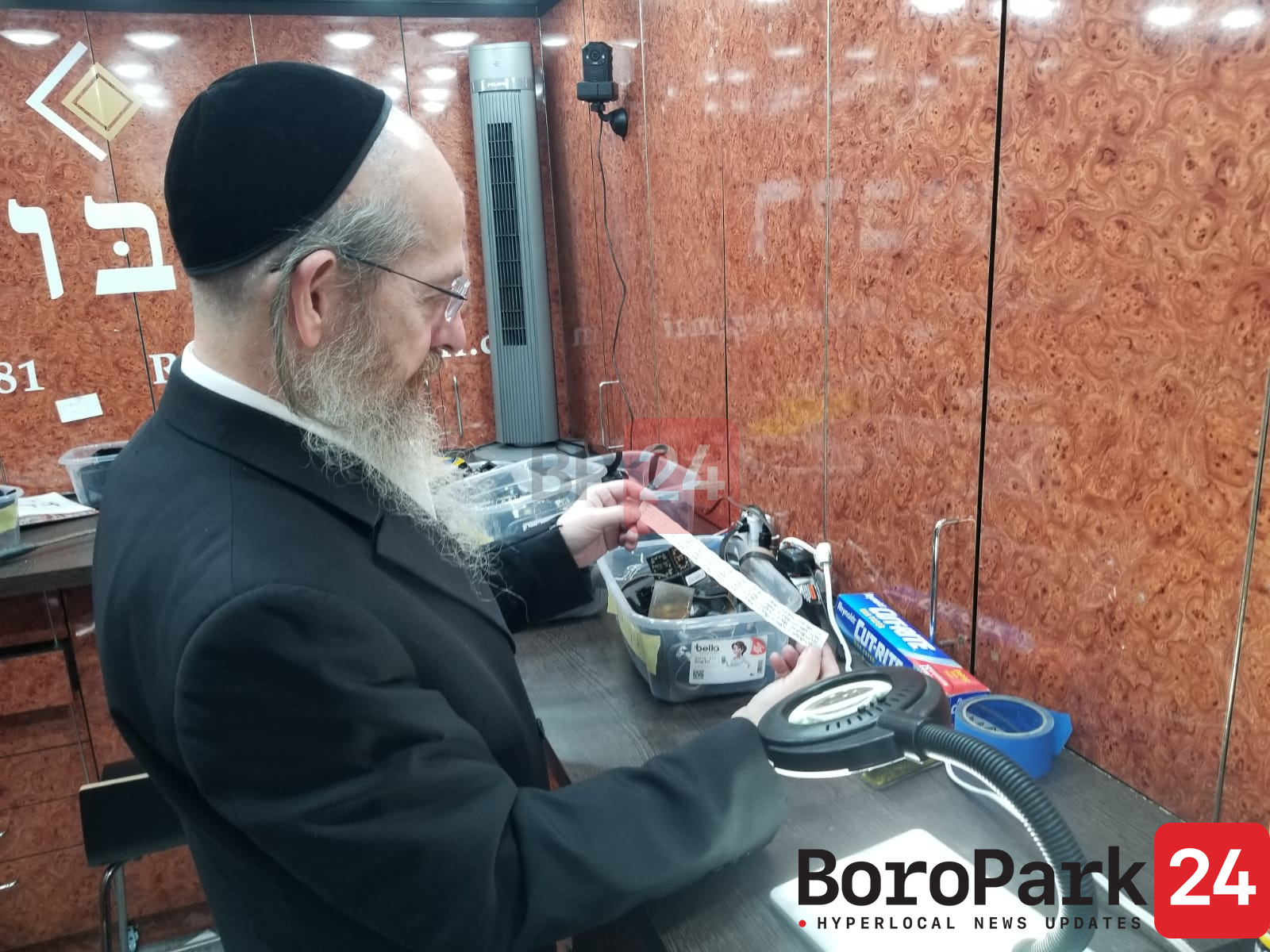 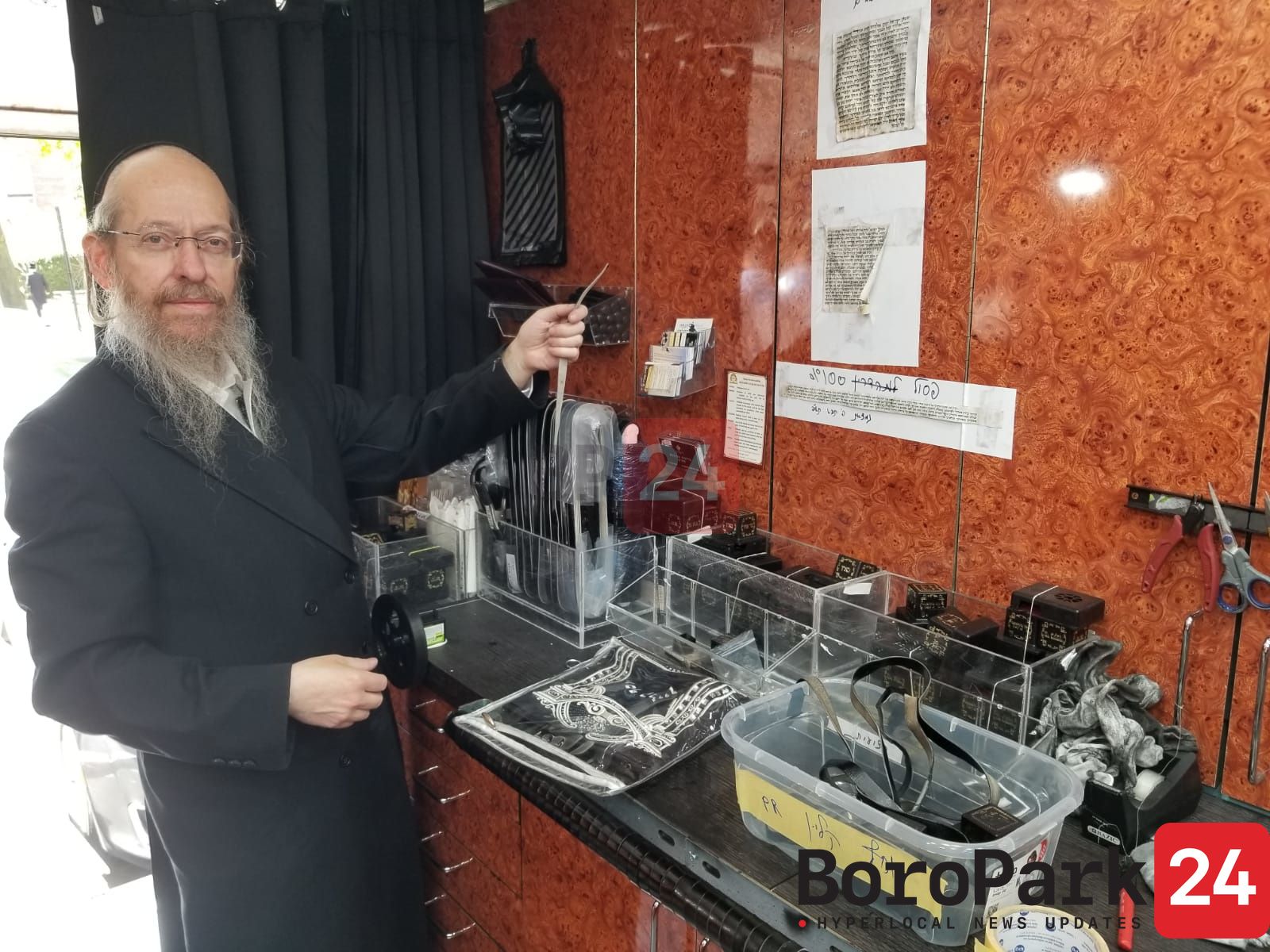 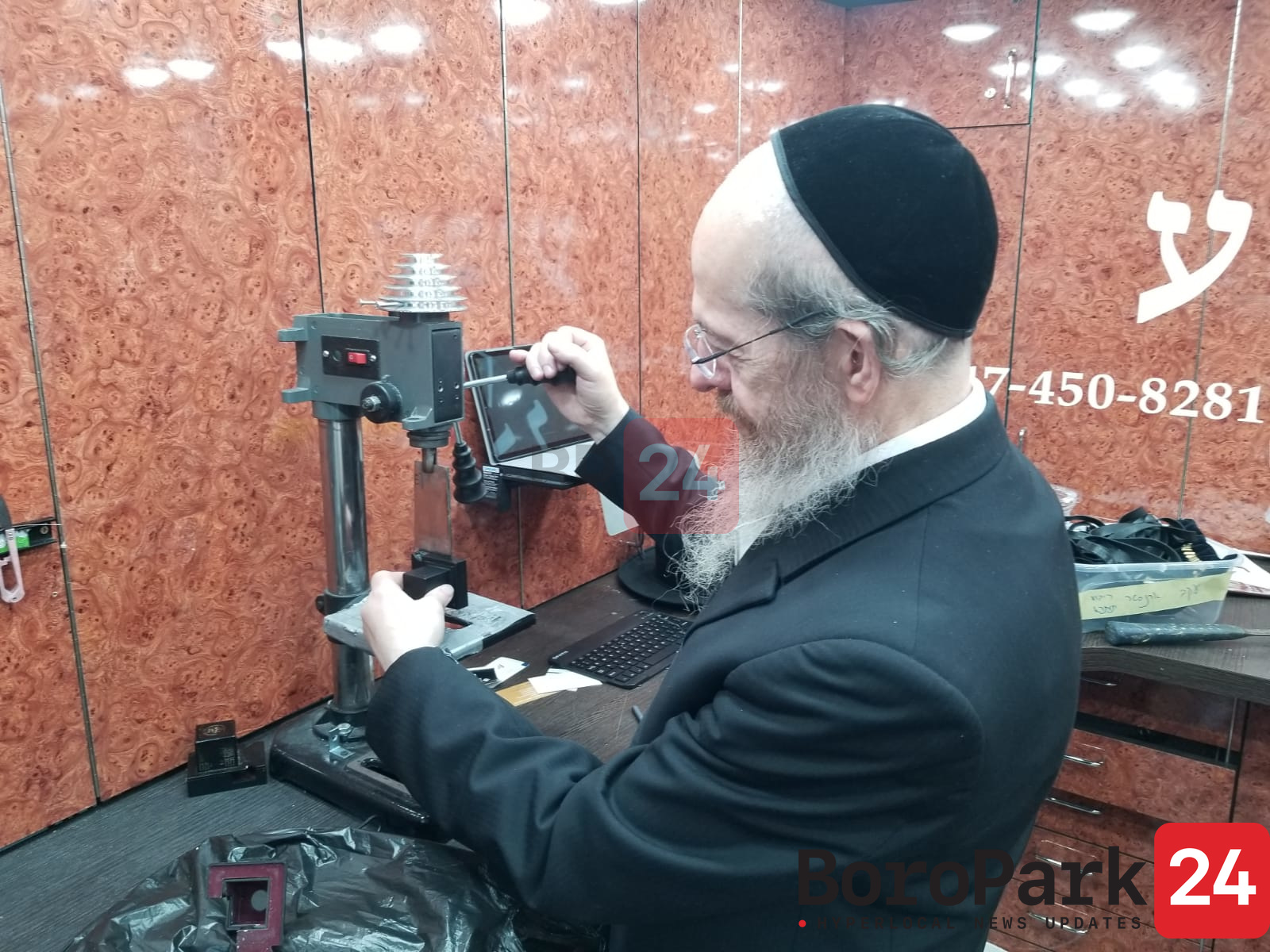 NYC In Violation of Not Protecting Disabled Persons