After Walid Khass, MD, a resident at the New York-Presbyterian Brooklyn Methodist Hospital (NYP Brooklyn), allegedly tweeted nearly 60 messages calling for violence against Jews and Israelis, Assemblyman Simcha Eichenstein demanded his immediate suspension in a letter he wrote to the New York Department of Health, the New York Post reported on Friday.

“I believe [Khass’s] conduct renders him unfit and even dangerous to treat a significant portion of patients, many of whom are my constituents” wrote Eichenstein, who, since 2019, has represented Boro Park and Midwood in New York’s 48th Assembly District.

Of Kass’s 60 anti-Semitic tweets, at least 57 of them call for violence, Eichenstein wrote. Among his explicitly disturbing tweets, Khass includes biographical information, such as that he grew up Palestinian, is a Muslim, and would like to join the terrorist group Hamas.

Kass’s call to violence and anti-Semitism “clearly [show] that Dr. Khass’s decision-making ability is compromised and does not live up to the high standards of his noble profession,” Eichenstein wrote.

After graduating from St. George’s University School of Medicine, Grenada, West Indies, in June of 2019, Khass’s anti-Semitic social media posts “went viral” the following month, whereupon the med school placed Khass on involuntary administrative leave and pulled him from participating in clinical rotations as a pediatric resident at NYP Brooklyn, according to canarymission.org, a website that documents anti-Semitism.

After the med school’s actions, NYP Brooklyn informed Khass that they no longer intended to employ him, reports canarymission.org.

In response, on July 31, 2019, Khass filed a lawsuit against NYP Brooklyn and SGU School of Medicine that referred to his “right to freedom of speech,” and he demanded $630,000 in damages and that the court “immediately allow” him to begin his pediatric residency at the hospital.

Since February, the hospital has been trying to appeal the decision of the Brooklyn Supreme Court that ruled that the hospital must honor its commitment to provide Khass with medical training.

I am deeply disturbed by the NYS Supreme Court’s decision to restore the residency of Dr. Wallid Khass—a virulent anti-Semite whose disturbing history of anti-Semitic posts on social media undermines medical ethics and basic moral standards,” Eichenstein wrote in his letter.

Instead of merely waiting for the Brooklyn Supreme Court’s decision on the hospital’s appeal, however, Eichenstein went a step further and told the New York Post that the New York Department of Health “should step in” to ensure that Khass does not practice medicine.

On Sept. 17, StandWithUs, a nonprofit group dedicated to Israel education also wrote a letter to the Department of Health demanding that it investigate Khass for his alleged hateful speech.

“Such hatred poses serious ethical violations, puts the lives of Jewish and Israeli patients in jeopardy, and has no place in the medical profession,” StandWithUS wrote. 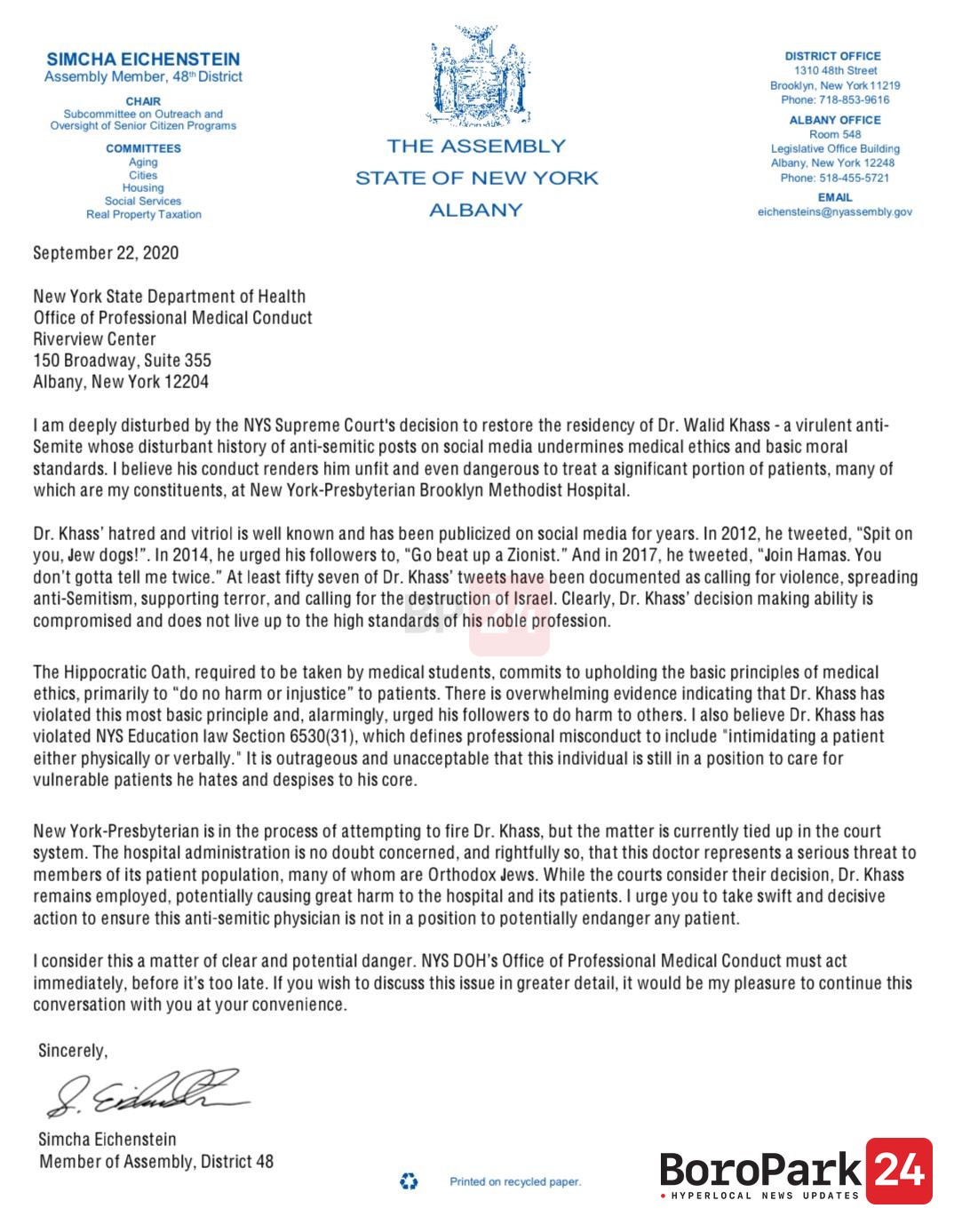 Kevias Mezuzah for the new Building of Mass Mutual in Monsey